A recap of how we got to this latest installment of "Love American vs Korean Style":

In Part 1- I met the girl I would marry. Her name is Kim and RUV is in the air!!!
In Part 2- Spent all my money on a MASTER PLAN to set up a birthday party that would put me with Kim.
In Part 3- Stupid master plan FAILS!Kim gets puked on by drunk Birthday Boy. Kim leaves. I am miserable.
In Part 4- Korean Grandmothers (Shaman) take pity on me. We Kamikaze in a taxi to Kim's. Grandma's sitting on my lap crushing my huevos. I may never have children.
In Part 5- I survive the taxi ride. The Grandmothers tell me they will fix all. I must return to base. I can't beat the midnight curfew but I damn sure try.
In Part 6- Suicide ride on a bus bumper. Crash. Injuries and more. Concussion too! Police chase! Escape & Evade!
In Part 7- Climb a telephone pole. Steal a bike with one wheel. Make my Great Escape!
In Part 8- Ride bike into a Banjo-Ditch (sewage). Another concussion and a laceration on the forehead. I crawl out and am captured by the ROK Army, then returned to base.
In Part 9- Got stitches/medical treatment at 0130 hours. Later that AM, a meeting with Military Police 1SG Black Thunder Johnson. Made an Ambassador to South Korea. Run to Motor Pool for a jeep.
In Part 10- Bicycle recovered. I fall into the banjo ditch. 1SG YOON/1SG Johnson/Me and the Korean Grandfather have a Pow-wow. Intercultural relations rebuilt! Valuable lessons learned.
In Part 11- The First Sergeants have a meeting. I am cleaned up at a ROK Army wash point. We go to Kim's. I am OBAMA, to the Korean OPRAH's (Grandmothers). I SEE KIM! We are returning to base.
In Part 12- I return to Camp with the First Sergeant's, jeep, and bicycle. My squad members, the house boys, and I/we all ponder MY fate. We break for chow (lunch). I opt for a nap and am awoken by my Squad leader SSG OLY. Intro to Staff Sergeant Oly (The Big "O") and the infamous Three Beeps! Time has come...I head for the orderly room.
In Part 13- I report to the orderly room. My fate is suspended until the next day when I must report back to the First Sergeant with my Squad Leader. I am re-directed to the unit supply room and meet Sergeant James Wheeler.
In Part 14- Learn about ambassadorship, love of life, Korean orphanages, and about giving from the US Army's Santa Claus, Sergeant Jimmy Wheeler.
In Part 15- I was to meet my fate. But what was it? I was reassigned and given a "Special Assignment". But what was it? I didn't know.
In Part 16- My "Special Assignment" was to ride shotgun on the trash truck going through our Army base. I banged my head on the truck's handrail and limply fell to the ground. With Kotex applied to my forehead I was taken to the Evac Hospital and returned to my unit. I am a cross between Elvis, Audie Murphy, Evel Knievel, Sad Sack, Ralph Kramden, and a crash test dummy.
In Part 17- I meet with The Iron Empress of Korea and her man, Huey P. LeDew of Houma, Louisiana. A date with my KIM...the love of my life, is arranged.
In Part 18- I wait at the main gate to meet Kim and the LeDew's to taxi over to some park on our 1st date. I worry. Taxi is late, I think. What the heck happened to her?
In Part 19- I have my 1st date with the lovely Kim at Sung-gee Park, Pusan, S. Korea on April Fools Day 1975. I learn what "I GOO" is all about. I AM THE APRIL FOOL.
In Part 20- The lovely Kim brings me something in a package. I am an MP on duty at Depot Gate in Pusan, S. Korea and I'm in RUV!

And now..for your Christmas 2012 pleasure... Part 21 of "Love American vs Korean Style"...
THE PACKAGE AND THE PROPOSAL 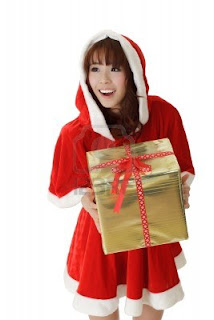 While performing my Military Police duties, I just happened to look up at a robin's egg blue little Hyundai taxi, like so many hundreds of others buzzing around Pusan in 1975. The taxi stopped just outside the front gate of the US Army Depot, where I was posted. It was a beautiful, clear and crisp day...that ruvly April early-afternoon day, in Korea. Call it hormonal ESP... or what-the-heck ever...but I was "Carnac the Magnificent" when it came to RUV and pretty girls. My Carnac powers had me focus upon who was stepping out of the taxi while a Goldstar three and one half transistor radio played Paul Anka singing "Having my baby". The girl of my someday LOOONG time dreams stepped out of the taxi wearing a gorgeous polka dot dress...at least I think it had polka dots. That, or my eyes were seeing spots, do to the blood flowing down and out of my brain, to somewhere below the front of my pistol belt (if you 'get my drift' and understand how the mind of a 20 year old soldier thinks). So anyways, the lovely Kim steps out of the taxi and pays the driver. She looks up at me and smiles just as a jeep (an M151 A1) runs over the highly shined right toe of my US Army jump boot! Kim sees me get my foot runned over and a look of "I GOO" and some legitimate concern (mixed with suppressed laughter) crosses her beautiful face. It is then that I see the package in her hand! She asks my Korean MP partner at the gate, a KATUSA, if I'm alright. He assures her that shit like this happens to M.P. COOKIE (my last name is Cook) all the time and LOOONG time!!! I hand back the smiling jeep driver his vehicle dispatch paperwork. Well...after I've first issued him a stern warning about not running over an MP's highly shined footwear, anyway. Whatever... I wave the driver on and I limp over to Kim and the KATUSA MP, a Corporal named NO, Hee Yung. Corporal NO tells me that the lovely Kim has brought us some home-made kimbap. I am grinning from ear to ear, while my eyes and other parts of my body, are popping out at her beauty. My foot throbs, as does the O.D. green colored crotch-area below the front of my US Army pistol belt. I am in RUV! It is right then and right there, and only 2 weeks after I first dated this girl, that I have decided to propose marriage to the very lovely Miss Kim! While my Korean MP partner, Corporal NO, wolfs down all the delicious kimpap, I start off with my proposal of marriage to Kim. I try to concentrate while the AFKN radio station is playing Paul Anka. I'm horny as hell! I'm nervous as hell!! I stutter... I mumble... as the lovely Kim stares at my mangled boot then gives me a sympathetic sweet smile. For great God's and Buddha's sake, I'm choking up! Me! You know???... ME?!...The guy with the big mouth! The same guy who now is shaking and can barely breathe...let alone talk! Hell, I can't talk! The song "Having my Baby" plays in the background. I panic! Kim's waiting! I'm sweating and it's only 64 degrees out! Finally... I propose...well, sort of. I say to her "Will you have my baby?" Yeah... no shit. That's what I said. Kim looked shocked! Her eyes were huge! She turned on her heel, jumped into that blue taxi, and left me quicker than a Klingon has his ass kicked by Captain Kirk on Star Trek! The taxi was doing frickin' warp speed and taking the lovely Kim out of my heathen galaxy... forever! I was devastated! Like Marlon Brando in A Streetcar Named Desire, I was limping as quick as I humanly could after that taxi! I was out of my mind! And I was yelling...yelling, "Hey Stella"!  I was devastated and almost made a hood ornament out of on the grill of a Korea Greyhound... A curse upon Paul Anka and his stupid song! Corporal NO swiftly pulled me out of traffic and returned me to my post on the gate. I cried. Cpl NO ate my kimpap and said, "You RUV her LOOONG time, huh Cookie?"  "Yes. Very LOONG time", I replied. "I'm helps you. Here, have some kimpap, Cook'shee. It's very much delicious good", he said.                                                     (To be continued)

*A note from Gene: I have this stuff highlighted but can't easily figure out how to unhighlight it. Oh well...Merry Christmas all! Please keep our US Armed Forces and their families in your prayers very LOOONG time!!! Remember what Christmas is all about. A gift from God. Jesus.The best gift of all! Merry Christmas and God bless you. -JihadGene (AKA: Gene Cook)
Posted by JihadGene at 11:46 AM

I well understand the blood redistribution thing. Dude, you really had it bad. Glad it finally turned out okay.

Wow, How'd you ever get together. She must have been In LOVE !
:)

Coffeypot- It really turned out fine!

We've all been there. Some in Pusan. Some next door in Chinhae.

Another installment; what a great Christmas gift!! How you ever got her to marry you after that proposition is beyond me, but I'm glad you persevered!

The best of holidays to you and the lovely Kim!!

Pam, it happened, but it took a whole lotta 'splaining very LOOONG time!!!

Thanks LOOONG time Mrs Who!!!