On Wednesday my best friend, Arnold went into ICU with a blood clot...in his lung. They ran a bunch of tests on him yesterday (Thursday) and so far, so good, under the circumstances. Arnold has always been not just a church goer, but a true believer and follower of Jesus Christ. In the fall of 1970 I first met Arnold. He's the type of guy/kid that was easily liked. I was friends with his older sister and I was scared to death of Arnold's Dad. Now, don't get me wrong...oh no! Arnold's Dad was a nice man and a rugged man. His Dad had fists that looked like 10 lb sledge hammers! His voice was as West Virginia deep, as his hands were coal miner strong! That's where that whole God thing came from, I'm sure of it...from the hills of West Virginia. Arnold got Jesus. His sisters got Jesus.... and if I had laid an exploring teenaged hand on one of the girls? Well, it was pretty much guaranteed that I was gonna meet Jesus at a young age, via their Dad's hands. You know...a laying on of those powerful hands ...and praying for my healing at a much later date. Oh well...some years went by and in 1972 I joined the Army... two whole days after I turned 18. In 1975, about 2 weeks after my 21st birthday, I married a lovely South Korean girl.  Arnold is 2 and a half years younger than me but followed my lead somewhat later. He went into the Army, got sent to Korea, and married the love of his life. It was 1980, and I was a small town cop, when I got a call from Arnold. He heard I had a Korean wife, and so-on-and-so-forth, and we've been best friends ever since. Arnold went back to college, Air Force ROTC, and was commissioned as a Second Lieutenant. After 2 and a half years as a small town cop...I forgot about all the negatives of Army life and decided to go back in and tour Korea's lovely DMZ. Oh fun!. Oh well...throughout the years we stayed in touch. They are the kind of friends you maybe haven't seen in 2 or 3 years, and you just pick right up where you left off. Smooth! Easy going! Wonderful! Later, in 1996, my wife picked up our newly adopted son in South Korea, while I was back home working overtime to make up for lost income, since the wife was going to be a stay-at-home Mom. At that time Arnold was stationed in Japan and he, his wife, and daughter, flew over to see my wife and our new baby boy. They saw my son before I did! I have video of it! Cool, huh?! Anyhow you can see how connected we are. In 1983 they visited us at Fort Ord and in 1990 we visited them at Fort MacArthur. Back and forth. Beautiful! All this time I have only met a handful of men like Arnold. He's my best friend. He and his wife are in our will to care for our son, should something happen to us. That should tell you what we think of him and his family. Now, Arnold is doing better but we ask you to keep him in your prayers. While you're at it, be sure you keep our wonderful US Armed Forces and their families in your prayers, LOOONG time, too!!! This song is for Arnold and his wonderful wife. The wife and I danced to this song. Beautiful. God bless you all! It's Friday! Let's dance!
Posted by JihadGene at 11:36 PM 5 comments: 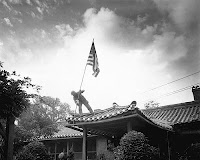 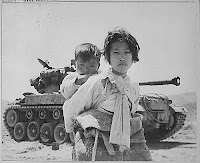 At this time my wife and I, and our families, thank you, the Korean War Veterans and their families, for your sacrifices. They were not in vain. My wife and I know this. Our South Korean family knows this. They prosper and are thankful to first, God...and secondly, to the United States of America and
it's allies who fought and died for them. The Korean War began on Sunday, June 25, 1950. Freedom is not free. Remember them. Thank you all.
Posted by JihadGene at 9:39 AM 5 comments:


It's Friday, people! You know what that means, don't 'cha? It means it's time to dance! While I was in the Army, I never heard anything good about Fort Polk, Louisiana. It wasn't anything about the people from that great state, it was just...Fort Polk. Blessed by God and my US Army luck, I never got down that way!  This tune is not only for the poor bastards stationed there....but for all our wonderful US Armed Forces and their families stationed in places that might even make Fort Polk look awfully good! Pray for them all and God bless them, LOOONG time!!! Let's dance, you heathens! It's Friday! JG ;)
Posted by JihadGene at 10:25 AM 3 comments:


We've been together over 36 years now...and my girl, my wife, my lovely KIM,  has never given up on me. Today, this Friday, we dance to this beautiful tune. Together and in love, we dance slowly. I am so very thankful for her. While God continues to bless us, we pray too, that He continues to bless all of you and our US Armed Forces and their families. Keep them in your prayers! You are, in ours. It's Friday, let's dance slow and lovingly, and always give thanks in all circumstances. "All" circumstances. God won't give up on you. We know this. Have a wonderful weekend. JG & Wife
Posted by JihadGene at 11:48 AM 5 comments: 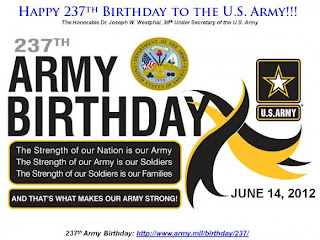 Happy birthday Army! You sent me to the Planet Ord, Ca-for Basic Training, 2 days after my 18th birthday... then to Fort Garbage, Georgia-for MP School...to my 1st duty station, Schofield Barracks and the Kahuku's-where I got sick of eating pineapples and going to the beach...uncharmed by Oahu and Honoruru's Hotel Street , I hopped a plane for Korea! Camp Hialeah-where I met my "very ruvly" wife. And that's only the half of it! Later it was Virginia, The Scenic DMZ, Monterey, and West Germany. My wife is Army strong! HOOAH LOOONG time to all our Army families!!!
Posted by JihadGene at 5:49 PM 2 comments:

Obama Girl Out! Obama Boy In! 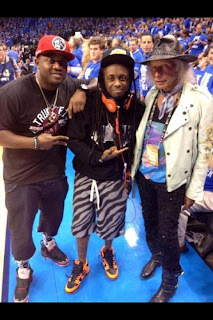