Booger Butt and the Wong's 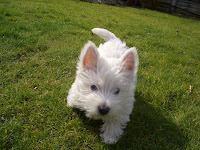 We live in a nice neighborhood. Quiet...peaceful.Meet our neighbors across the street. Jerry and Susan Wong. They are restaurateurs. Very well known and respected in town. Their people founded the town. Chinese people who built the railroads. They are salt of the earth. Susan was Miss Hong Kong 1950 or 60 something. Jerry is older by 15 or more years. They have been married many years. They have no kids. No pets. They are highly respectable and prominent people. They have art works from Paris, some of which are of more value than their lovely home. They are a refined couple. One would never put their elbows on the table if eating at the Wong's.
Etiquette is the Gospel in their home and rightly so. One's home is one's castle. Everything has it's place. If nowhere else in the world, Feng Shui is found in this house.
I have a dog, a West Highland Terrier, called Booger Butt. She is 8 people-years old now, though she has slowed down as of late, she once was a rebel. A rebel with a zeal for life and high adventure! She's a spirited dog. A real independent thinker-stinker of a dog.
Let's go back to the year 2000 and Booger Butt is 6 months old. Booger Butt is full-on into her growing puppy status and is developing quickly. If she can get out the front door, she will bolt. It's her thing. Then she runs down the street having a great time, doing whatever the hell she wants, refusing to come back to me, and no matter how sweetly I call her...she ain't buyin' it. It took a while but I figured her out. I finally figured out that if I scolded her by saying stuff like "Ya heathenistic flea bitten rotten dog! Ya pointy-eared Science Diet munching pig! You're gonna burn in a lake O' fire if you don't get your AKC registered booty home right now! You're gonna burn in hell alright...rubbing your butt on the Devil's carpet tryin to put your smoking ass out like a cigarette in an ashtray! Oh... I guess I could of just said, "Bad dog", and she'd a come running for home, but that ain't me. Oh well, one early morning my wife (Kim) opens the front door and Booger Butt bails. She runs across the street to the Wong's. Now why-oh-why did Jerry Wong have to come out of his front door at that particular time to get his morning newspaper... I'll never know. Maybe it was just Chinese joss (luck) or perhaps Booger Butt was a Chinese Foo Dog in a previous life. Regardless, Booger Butt had turned-and-burned like a little doggie jet fighter headed directly between the legs of the elderly Jerry who was bent- over, about to pick up the paper. Kim too was running , in hot pursuit of Booger Butt, and heard Jerry GASP! Now Booger Butt had compromised the safety and security of the Wong's pet & kid free zoned home. I don't know how she did it, but quicker than a Korean can count to 4 (one Mrs Shippy...two Mrs Shippy...etc) Booger Butt found Susan Wong's bed in that big old house, with Susan fast asleep in it. Booger Butt then jumped up on the bed and began licking Susan Wong's face. Before Jerry Wong and Kim even entered that puppy-penetrated doorway, Susan began to scream! YAAAAAAAAA! And then I think she began saying some kind of Chinese curse words between yelling YAAAAAAAAA! at the top of her lungs. Poor Susan. I think she had never uttered a bad word in her life until that cold nosed and pink tongued morning. Kim apologized profusely and Susan Wong, classy lady that she was, quickly pulled herself together and said, "You have a very friendly dog".
Posted by JihadGene at 8:49 PM

What a cute dog. My best friend has a westie. It's not dog, it's people.

There is a reason why terriers are afectionaly called "terrorists".
Because they are holy terror for sure!
And I can identify with Deltabravo.
Orange striped cats must be the crazy bunch that at least has the affectionate gene that yellow ones don't. We have since remaned our kitten "Satan's Little Helper" for that very reason he is BAT SHIT CRAZY.

I LOVE it! Booger Butt is just a GREAT dog. Gotta love those terriers!!

Maeve- I never knew this about orange striped cats. I do now!

Pam- What can I say? I ruv my Westie!

For genetics reasons that cover coat color, 75 percent of orange cats are male. 100% of them are crazy.

PS Thanks for liking the story

Booger Butt is a major cutie!!

Funny Story! Now, how did you come up with the name Booger Butt?