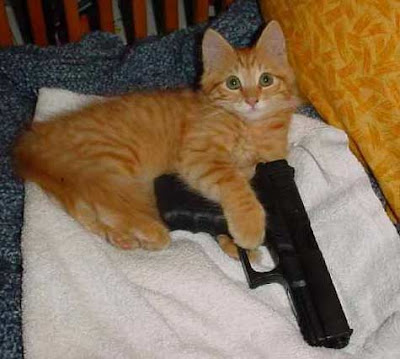 Sometimes someone posts a comment that is too good just to be left behind in the comments section. Lady's and Gentlemen, Great Reader gives you...

A Cat Tale (or this ain't Felix) by deltabravo

Deltabravo
Posted by JihadGene at 6:02 PM

My wife and I fostered orphan kittens and shelter cats for a couple years. Tons of stories there and it was a lot of fun. We had 31 kittens at the high point (in boxes, bedrooms, cages, etc so it's not as wild as it sounds, except at feeding time, then you'd think you were in a Ford factory in 1922) and ended up with 13 of the darn things we decided we had to keep, and currently have 6 as the rest have departed, some too soon.

Anyway, as far as fur and personality goes, I can attest to the fact that orange cats are a breed apart, pyschologicaly speaking. They seem to be more neurotic than the others which can be good (funny) or bad (freakin out at random). The other colors I would break down as follows:

That's the extent of our experience thus far.

I saw this story in the comments yesterday and loved it, but I just read it again... just because. ;)

Thanks for the cat facts C_Brob!

Oh, no. You're gonna make me write another cat story, aren't you?

Okay, I'll keep this one reasonably short, having read about all gray cats.

Yes, they're almost Vulcan, but almost something else....

Once long ago when I had fewer children than I have now, I had the idea that I wanted to buy a cat. I probably should have poked my eye out with a hairpin instead, but the little ones wanted a kitty.

So off to the animal shelter we went. We walked in the door and were met by the most ungodly howling I have ever heard. Seems the animal shelter people had "rescued" some illegal dogs from some locals. Said dogs were bigger than ponies and were half something, half wolf. Never saw dogs so monstrously big in all my life. They howled at the indignity of the cages. I pitied them, but was thankful for the cages.

Rumor has it white kitty was taken from cage that day and sent to white kitty heaven where all the unadoptable cats go. I bypassed a cage that held one yellow stripey cat who was busy hanging upside down by his back toes from the bars at the top of the cage and busily chewing on the bars at the bottom of the cage. I knew better than to be suckered in by such cute antics. Bye bye, yellow stripey catastrophe.

Then we saw him. A sleek Gray cat with green eyes. He was beautiful. He was ours. My oldest, with all the imagination a four year old can muster, named him Kit. We brought Kit home and he settled in with the little children. Until they tried to put doll clothes on him and pull him in a wagon.

That was the moment Kit decided he wanted to be an outside cat. The US military does not have fighter jets that move faster than Kit did when he heard the squeals of delight as the little girls would find him sleeping on the sofa.

And outside was his domain. He hunted rabbits, and won. Gardening was a hazard, because his grayness would blend perfectly with the foliage, and I would be peacefully planting impatiens and he would leap out at me from right under my nose and run away, leaving my heart pounding and my mouth swearing at him like a sailor.

Child number three came along. And as small children often do, they learn to walk. This particular small child was very small. Just slightly larger than rabbit size. Kit knew he could take her down. And he tried every chance he could get.

Small child first met with the horror of The Kit one summer evening as she toddled across the lawn. I became aware that Kit was quietly tracking her, following slightly parallel to her path, hidden by the garden flowers. As small toddler passed the garden, with her back turned to him, out from the underbrush bolted The Kit. Across the lawn he raced and sprang at her back knocking her on her face.

I admit I was filled at once with horror and with... amusement and... well... appreciation. As I tried not to laugh at my crying baby, I picked her up and scolded the cat, knowing that my mother of the year card had been revoked for life for not kicking the cat.

And I realized with a sinking feeling that if The Kit weighed about 70 more pounds, I wouldn't be safe either. Do cats just watch us and think "I'd hunt it if I were bigger?"

Kit tried that trick a few more times, but if he caught my eye before he pounced on his little prey, he'd walk off in disgust at his ruined chance. Baby spent years examining the garden foliage with suspicion before she'd walk anywhere near it.

The one thing Kit couldn't take down was cars. One ran over him and smushed all his breathing apparatus through a perforation in his diaphragm. Damn thing wouldn't die. Relatives suggested that a new cat would be $35. But I had too much respect for an animal that could get run over that badly and crawl to the back yard and sit under the porch. We went through with the operation. $1200 later he was good as new.

Damn. I did not pay $1200 to fix him only to lose him to the big woods. Two hours of calling him and banging his food can with a car key, and eventually I found him. He was sitting on a log nonchalantly giving himself a bath.

Back into the now clean car carrier. On we went, to a new home where he was smart enough to let the possums eat out of his cat bowl and not bother them.

Two years later, and he finally encountered a car that did him in. An unworthy end to a splendid cat.

Deltabravo, I'm sorry to hear about Kit. We've had some similar experiences. Mine was with a swiss coffee colored femme fatale named Monique that rang up a $4500 bill at the emergency hospital about 8 months prior to using her 9th life...

Anyway, our grey was named Grey Goose, aka Mr Goose, Goosey. I swear if he could talk, he'd a taught me some things.

I've had an orange that was more like the first; looked just like Morris the commercial cat. We called him Sammy.

Once had a little black and white shorthair that was fond of alking over people's laps so we called him Hannibal. And a little tiny prissy long hair that was (mostly) antisocial but not in a bad way. She was Penelope.

Currently have a tortiseshell (Julie), a grey tiger (Chester) and a mostly black (Shadow). Each is unique and fun to watch. Hard to tell if a dog would be as entertaining.