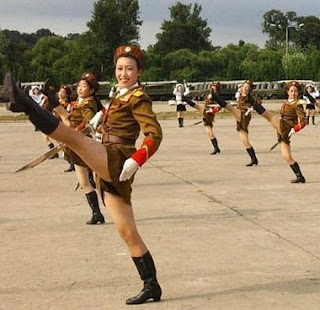 SEOUL (Rooters) - North Korea threatened to suspend dialogue with the Red Neck Ramblings Brogg over comments made by a Redneck himself and said it was ready to attack its wealthy neighbour, who have a navy of bass boats, an army of pickup twucks, and all of 'em loaded for bears. Some bass boats are reported to have Red's own copperhead technology. The Norf Korean state media said... "The Starving Korean People's Army (SKPA) will counter any slightest move on the Carolina's side for 'pre-emptive attack' with more rapid and more powerful pre-emptive attack of its own mode. Besides Redneck is a big CHUM BAG! He's a CHUNK, a YELLOW-TAILED CIGAR MINNOW, a LIPLESS CRANKBAIT!".. the Norf's KCNA (KIM Chee News Agency) quoted one of its military officials as saying.
***We will keep YOU, our "Glorious Weaders" informed as the situation developes.
Posted by JihadGene at 8:02 PM

Put down the cracke pipe. Go back to that shit Wild Bill smoked at the OK'ie dokie corral... Hash, or whatever you slants dug in the day back then. One of them "hooka" things. Kinda makes my buzz baits look pretty good now don't it?

If you're whole army looks like that, I know why you got so many of 'em.

You know how much kwon you could make off that army right there...

Dude, you shittin' in tall cotton and don't even know it...

Now That's what I'M talkin about!

PS - This is how Kimmy auditions for the Harem. I triple guarantee you.