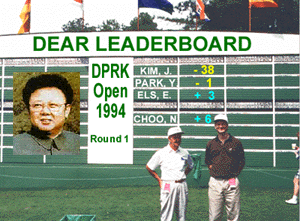 DATELINE- NORF KOREA (APLEE,U.PLEA.EYE,USPS,KIMMYnewz,U.P.S.,& UPSin-Ya!)
Great and Glorious Peoples of the Peace-Ruvving (Thru-World-Domination) Democrappick People's Repubrick of NORF Korea DEMANDS a FAIR and TRUE Masters Tournament!!! Our most be-ruvved Great Reader, WORLD'S GREATEST GOLFER, KIM Jong IL was en-route,wiff glolf clubs and everythang, whens the FAA (*F* All American flyers....or just *F* All Americans (korean one's too), in general) decided to wield the heavy handed monkey-wrench of dubious behavior in the name of lawlessness and disodor! In the words of that Great American, Gomer PYLE,
"SHAME. SHAME. SHAME"! or was that HILL-Ree Clinton? Regardless...our beruvved and most wonderful duffer, The Great Reader, KIM Jong IL will not bee in the former Soviet State of Georgia, home to the American Cracker-box Builder/Enabler/President Jimmy Carter, thusly missing out on this GLORIOUS VICTORY for NORF KOREA! Our Starving People's own Great Reader and Master Pilot/Master Military Strategist/Master of Disaster KIM Jong IL, will not take this laying down! It is reported that Great Reader began taking SNIPER FIRE from RED NECKS over the Mayberry/Mount Pilot regions of Norf CAROLWINEAH. As if thats was not reprehensible enough, Great Reader,KIM Jong IL's flight was "red-waved" off frum the City of Atlantis, Georgia because of a failed inspection required by the FFA (Future Farmers of America). It seems there was lead in the paint-chips near the wheel wells of our plane...an MD/MoganDavid/MadDawg 20/20. It was further disclosed that the "Here Boy! Pooch Treats" served by our Joy Brigade Stewardesses contained suspicious CHINESE chicken parts! So our Gloriously Great Reader returned home (after having his stomach pumped at 33,000 feet) to his adoring fans in the gulags and peasants, starving in the fields of Beautiful North Korea. TIGERS WOODS...when questioned by Norko Newz about his most assured victory (now that Great Reader KIM Jong IL was out of the competition) was quoted as saying the following........WTF? We also questioned Senator Barrack "Whos-Named" Obama's SPIRITUAL ADVICER the Reverend Jeremiah Wright Jr (the 13th) about the American Airlines incident and the "REV" said only...
GAWD DAMN AMERICAN!
Posted by JihadGene at 4:38 AM

Dear JG,
I ain't shot nothin' flyin' over top the still lately. Keep your silver wings the hell out of my airspace potty mouth... You think one of your missles will make "big boom boom long time"... you ain't seen my stills when it brows rup.

Wed Neck say...
"You think one of your missles will make "big boom boom long time"... you ain't seen my stills when it brows rup".

Naw, I ain't swingin' OB's way. I can't tell what planet he's from, but it ain't this one, and Hillary is clearly an alien your she'd have cut Willie's wonka off after the last sittin' in the white house deal... so , you do the math. Get your abacus out if you have to.

PS: Hey smartie pants, I wrote you a letter back at my prace.

PSS: Hey, you got any bad asses over there? I'm willin' to go 60-40 with you on a Walker Texas Ranger vs. the best you got pay per view. That'll get you off the weader stool and into pwomotions. Plus, you'll have beer money if we can pull it off.