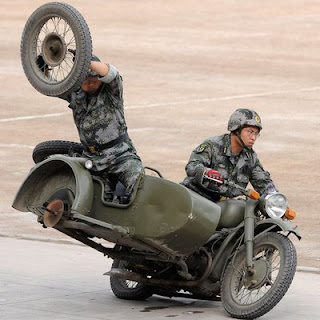 So last night, I told my lovely wife...my cute Norf Korean Minister of Finance...that I again wanted to buy a motorcycle. She thought for about a whole one half of one second then proceeded to remind me of my jaded motorcycling past. She recalled that I had committed jihad (code for crashed) on my old motorcycle in 2002, 2005....and yet again...only one week later, in 2005. I replied that I sure would like to have one...as I gave her my world famous "sweetest smile". :) She said nothing...but she gave me "the look". You know the look I'm talking about? Yes. That one. The look that tells you she is seriously considering giving NAVY SEAL TEAM#6 "the green light" to take your heathen motorcycle-wanting-ass out. Awww crap. My wife has the sweetest Korean face in the world, but being a Korean... stuff can go south or turn North Korean on you in a ramen minute. Ride safe!
Posted by JihadGene at 9:47 AM

Don't let her talk you into a Vespa.

Hey, with gas a 4 bucks a gallon you'll be saving money!

It is better to ask for forgiveness than permission.
Anyway, Good luck on the new Ride !

I keep thinking about it myself, but something always seems to pop up as a priority. Like a kitchen remodel..

innominatus- I'd rather drive a Chevy Vega!

Kid- About priorities- Me too.