Why I RUV California or... I'm a Korean

So I live in California...so what? I have relatives in Texas and Nebraska who say we should move out there...however, my wife's side of the family with their Souf Korean in-fru-ence, tells me otherwise. My Korean 13 year old nephew is visiting with us and it has been a blessing in that it has made us take some time off from our clothing store(Fashion Thug...as I call it) and get away. Last Sunday we went to L.A. and had a hoot at Universal Studios! My nephew is the kid with glasses looking lost, or wishing he was the hell away from me. I am the big guy with the mustache looking like Clark Griswold at Wally World. My son is the Korean looking kid with the Griswold cheesey smile. As an Uncle it is MY job to see to it that MY nephew is gonna have a good time whether he likes it or not...by God!!! 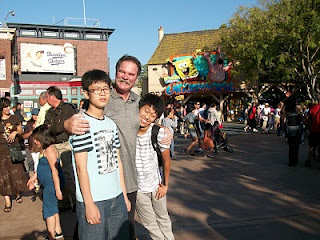 The next day we shopped the Fashion District of L.A. for more inventory as we gear up for back to school sales. Tuesday it was a work day, then came wonderful Wednesday which found us at beautiful Monterey Bay! We did 3 hours of whale watching from a boat where we saw both blue whales and hump backs! It was totally AWESOME looong time!!! We even caught some possible Navy SEAL's on camera about to invade Monterey's Fisherman's Wharf... 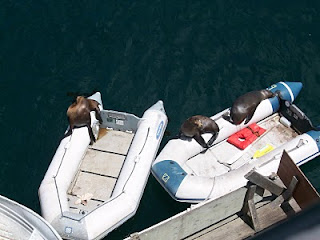 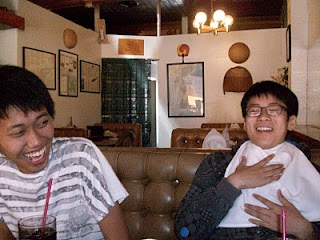 Next on the agenda are Yosemite, Kings Canyon, and Sequoia National Parks. From where we live in California's Central Valley it is all within three hours driving time or less. Just try driving to the ocean in Omaha or whale watching in Wichita Falls. Everything is bigger in Texas but do they have giant redwooods? On the plus side, in favor of Nebraska and Texas, they don't have Nancy Pelosi. If only Nebraska and Texas had rice paddies and kimchi trees...then I could move. Happy travels! Ruv you all a very long-looong time!!!JG ;)
Posted by JihadGene at 8:36 AM

Labels: Why I RUV California or... I'm a Korean

I miss California like a fat kid loves pie. Our mantra around here is "when we move back home", meaning SoCal. I ignore the politics and other crap as much as I can there, because I'm within driving distance of anywhere I want to go and anything I want to see. The hope that we'll someday get to move back there is the main thing keeping me off the rooftops with a high powered rifle some days.

You look like the most fun person in the world. :) And hey, don't think I didn't notice that Brooklyn Dodgers billboard behind you. Ericklaw approves!

Also, I have a funny word verification: "Gingunis"

Kimchi trees? You are a riot - once again.

I "heart" Monterey! All the other adventures sound like SOOOOO much fun. Loving those smiles, too.

I happy your nephew came to visit and got you all out of the hacienda. Keep having tons of fun and sharing it with us!

LeeAnn- Much as I curse our politics and taxes out here ...I love my California too much looong time to leave it. I hope you can get back out here too!

Ericklaw- I ruv you looong time too! Of course you would notice the Brooklyn Dodgers billboard!!!

Tankerbabelc- Monterey is da BOMB!!!
It was 68 there and sunny while it was 96 in the valley. We will keep having fun or my name is not
KIM Jong Griswold!!!

Great Pictures Gene. Happy to see everyone having a great time. I'm envious. Like you allude, it's been 90 and 90 % here in Cincinnati, far from the waves and surf. If I didn't have a pool, it would suck looooong time.

Kid- I'm with ya on the pool! I care and maintain our pool year-round (also I use my son for slave labor) just so's I can play Blue Whale Water Ninja in it come May thru the first week or two of October!!!

Consider me the near east coast contingent of blue whale water ninja !
But here, it's more like June - August. And I gotta cover it the rest of the time.

Come to think of it what the hell am I doing here? Oh yea, need the money...

Kid- We need the money, I understand. But in California "they"...the long term "alleged" workers...who can work...need me to work so they don't have to. It isn't right.

Wonderful pictures and I agree with Erica; you look like the most fun person!! :-)

I'm a native Californian and love it... if only about half the people would leave... LOL!

Have fun with the family, Great Reader!! Ruv you looong time!!!

Pam- From CA to FLA? Not bad at all!
Getting away from work is fun looong time. I can't wait for my next Great Escape!

You've been having way too much fun... good for you! LOL. There are good and bad points to every place and everyone has a place they love no matter the down sides. Glad you found yours! We're still looking for ours.

That is the way to have a good time.

The seal picture was great too.

USA_Admiral- Thanks looong time! I ruv the seals even if they are Navy.

You are lucky to be a bit more centrally located than me. Haven't been to Monterey in years and years. Yosemite is my favorite place on earth. Enjoy!!

Looks like a good time was had. Dude, I live in Salinas. Next time you're in Monterey drop me a line and I'll buy you a bowl of the best Clam Chowder on the coast. Vivolo's in Pacific Grove. It's Juche!

I"m in GA now, getting my ass kicked by this awful phenomenon called humidity. It's hard to get motivated in this weather, and I really miss CA.

I love Monterey, and one day hope to buy something in Seaside. My idea of weather is never to go above 89º! Ha ha As if.

Anyway, glad you're having a great time with your nephew. Your son looks over the moon, very happy to have his cousin there. Maybe your nephew can apply to go to university in CA.

Wish you had known you were coming to L.A. You were free to use the house --son is there taking care of the dog and cat!

I too miss SoCal, but not quite enough to pay the horrendous expenses to live their again. But where else do you have your choices of good Korean restaurants?

Six- U cracked me up looong time with the JUCHE!!! Sounds like a plan. We you ever stationed at Fort Ord? I took basic there and was stationed with the 7th Inf Div later in the early 1980's.

Kanani- I hate humid weather too! Sorry but I just had to rub it in about California being so good. Come back, as we miss you LOOONG time!!!