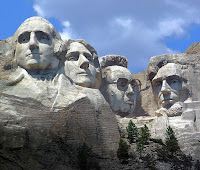 Dear readers, in case you haven't heard our great and glorious leader, the Mr. Mellow Yellow of Pyongyang...KIM Jong IL...has made a grand and most magnanimous gesture to the non-tax Free World by offering to send an envoy to Barack Obama's presidential inauguration and the Great Reader's offer was declined posthaste. Meanwhile back in "The Land of the Morning Missile Launch",Norf Korea, we find Great Reader, KIM Jong Il, back on the Al Goe invented Internet at his trusty Chicom-Mart computer viewing highlights of B.O.'s inauguration on Yoo Tube...

WANG- Here Sir! What's the matter, Great One? What is it that has you so upset? I know Barack Whosenamed Obama's actions have pimp-slapped the face of the gloriously malnourished North Korean People by refusing our DPRK envoy but what now, Sir?

WANG- I'm looking, Sir. What is that?

KIM- It's either a beluga whale on the gurney or Ted Kennedy is strokin' out! Holy nuclear kimchee!!!

WANG- I didn't know you were so fond of Ted Kennedy, Sir.

WANG- Well, what is it, Great Reader Sir?

KIM- Okray let me "SPLAIN" it to you like Ricky Card-O does to his red haired wife on "I Ruv Rucy".

KIM- Looks here. I'm da one who is the original around here. I'm a twin setter!

WANG- A trend setter, Sir? I guess that point could be made.

KIM- Of clourse it could! What with all the talks of I'm haves a stloke (stroke) and all...plus all the happy talk of what will happen to Norf Korea if Great Reader KIM Jong IL croaks off?! I'm tells you it was all the bluzz!!!

WANG- All the buzz, Sir? Well true, Sir, but you are not exactly the 1st person to have stroked-out.

KIM- No. That's true...but you haves to admit, I brought it back in style and Teddy K. ain't nothing butt a damned copy cat! Hey look, General Wang! Who's that in the wheelchair?!

WANG- Hmmm... I'm not positive but I'd have to say it's either Fred Mertz or Dick Cheney, Sir.

KIM- Aww kwap! Everyone's gettin' into the act.
Posted by JihadGene at 8:44 AM

I'm not positive but I'd have to say it's either Fred Mertz or Dick Cheney, Sir.

ROFLMAO!!! Excellent. Nice to know who everyone is imitating with all the medical stuff.