The KIM Family and You...An Update 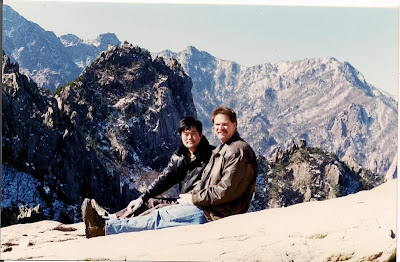 Holy WOW, Batman! You guys and your good vibes and prayers are GREAT LOOONG TIME! The Boss Lady (wife/Kim) called Jina (our niece) who told us that her Father (U Tae) had the biggest smile on his face when he came home to what he thought would be an empty house late at night. Upon seeing Jina and Jae he had a smile from ear to ear. While my wife, being Korean, didn't say from ear to ear... she did though... point from the corners of her mouth back to her lovely earlobes, thus showing how far his smile extended. We didn't tell him the kids were coming home because he had enough on his plate with his wife in the hospital with cancer and running his electrical business. Her cancer was detected only after our niece and nephew arrived here in California on the 26th of December...of all the rotten stinkin' luck. The wife and I kept it a secret from Jina & Jae, per their Dad's request, as long as we could until Jina pressed on with questions as to why her mom was still in the hospital for what she was told was only a biopsy on January 5th. They had gone on an organized tour that same day (the 5th) to Las Vegas, the Grand Canyon, and touristy spots of Los Angeles for 5 days, then back home with us in the Central Valley of California. It was now January 13th and my lovely wife Kim told them the sad news...thyroid cancer. Their Mom's cancer was detected late and had spread. The hospital would do it's best. She will not return home for at least another week and the outcome is wait and see. My brother in law, U Tae, at age 50 has worked so very hard all his life and only recently had a beautiful home built for them back in South Korea. It has been saved and paid for by his years of hard work and dedication to his family. Just when everything should be going wonderfully for them, life takes this terrible turn. Again, I must say that U Tae is the kindest and most gentle soul I have ever met. You can even see it when he drives in crazy assed Korean traffic....he yields to everyone and everything...U Tae even bows to them (the other drivers) from behind the steering wheel, while I would be giving them the finger! I've been with him, in Korea, and have seen him do this...for real! His electrical shop is always making some money and I know he could generate much more but he is such a gentle guy that he does not push issues of money rightly owed him. I'm sure that drives his wife nuts but that is the kindness of my brother-for-life, U Tae. Instead of coming home to an empty and cold house, Jina and Jae are back home. U Tae is happy. This is answered prayer!!! He needed the kids with him and your prayers. I am blessed to be a part of my wife's family and blessed by having great folks like you who drop in on the web. Prayer works. Thank you.
The JG's and Kim's family.

The world needs more U taes in this world.
Children are the greatest gift we can ever recieve. They fill our soul with happiness & love.
They are our reason to live.
I'm sad their trip home to you was cut short, but their light & love will help heal their mother.

You are so blessed to have them in your life! Also what a great picture!!!

All of you give me hope for the human race!

What the Evil Transport Lady said.

That's wonderful! What a blessing at such a stressful time..

Keeping it going for U Tae's wife.

I'm so sorry to be late at this.
I guess it doesn't hurt to add more prayers, does it? Doing that now.

I know I'm late, but maybe a few extra prayers will be heard for her.

U Tae sounds like an extraordinary human being - they are like angels on earth. I wish I could come close to that level of serenity in my life, but I'm not able to do it. I'm so glad the kids are home to be with him, I know it will ease his heart some. And I know their mother will get a huge lift by seeing the kids too.

Gene,
We're keeping the prayers going your way and to South Korea.
I love the photo of you and U Tae.
As always, I love you,
Elder Sister