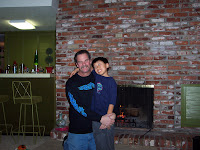 Great Reader (JihadGene) and the Mrs (Kim) have been working on this kid (Ben) since he was three and a half months old. He was that old when the wife FedEx'd him from South Korea. Got him on Ebay from a Power Adoption Agency. He was almost new, but he was out of the box. No PayPal. No credit cards. No diapers included. He recently turned 13 years old and before we know it, he will be unleashed upon the world. My, it seems like it was only yesterday when he was age 10 and he walked past me...farted...then looked at his bee-hind and said these immortal words, "Hey Dad! There's a duck in my pants"! Lord, he's just like me. I didn't think he was listening when I was watching Caddy Shack. Or when I'm driving. Or when I'm happy. Or when I'm pissed. Now, in the morning when he steps outside the house, he automatically hawks one up, and launches a loogie into the flower bed. We now have something made of flem that resembles the termite hills you could take cover from enemy fire behind, found in the book "We were Soldiers Once and Young". I shit you not. We both spit there. He got talked to at the Christian school he goes to for spittin' outside the classroom door. It seems he's making his very own termite hill there as well. Guess I'd better be careful of where I scratch before I get another call from the school. He's like my wife too. More of that at a later time. JG
(*Photo JG and Ben 2004)
Posted by JihadGene at 8:33 AM

Labels: my son my shadow

Termite hills and all!!

Oh, and we can only hope he's just like you. And the Mrs.

How sweet. I hope he keeps following in your footsteps. Or maybe not.

Man! You two are CUTE! I love this photo so much, I need to save it and look at it if I'm ever feeling sad. Very, very sweet.

What a cutie! And he's already got all the classics down... spitting and farting. :)

LOL! LOVE the look on his face!
Priceless.
Kids truly are the greatest gifts you can ever have.

Tammi- Tank you for fuzzy wuzzyness!

Vixen- Tank you! Or maybe snot.

Pam- We will start on belching tomorrow! Did I'm tell you he has arm-pitt farting, down pat? That's sum kid!

Drat - I meant to come back and leave a comment yesterday, but never quite made it.

That is a great pic. LOL. You two look like trouble on 4 wheels. ;-) I think Mrs. JG has her hands full.

LOL! Great tribute to your son.

As for how he is like his mother...I hope it has to do with cooking or reading or smarts. Let him pick up the questionable habits from you.

I forgot to ask when he does he get turned loose on the female population of his school? Are they ready for him?

Train him to say "Yes, dear" and he'll be a happy man.