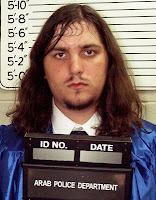 Since Barrack "Who's-Named" Obama has begun his Mid-Eastern Tour d' Kools (sponsored by Rezko J. Reynolds Tobacco Company) an increase in "Arab" crime has been noted here at Great Reader Headquarters. We don't know if it is a direct result of Obama's visit to the middle-east region or just another case of Global Warming. Pictured here on Great Reader, is Arab High School's own Senior High Graduate, the 18 year old Mr. Hon Orr Stewdent.
It seems Stewdent has been arrested for shooting the "banana", which in Arabic means "the finger", at his Principal, Don Imus, during the Arab graduation ceremony. Stewdent further disrupted a reading of the Koran, wiped his feet on prayer rugs, cursed his family (who apparently are Obama supporters), and called them all a bunch of "Himey-Town sons of bitches who he'd rather cut the balls off of, with a rusty Lady Schick, rather than look at". Before Arab P.D. arrived Mr Stewdent allegedly took a swing at Arab's revered Mullah, Al Sharpton, who countered the blow by striking Stewdent with his bullhorn. Sharpton yelled, "take that you nappy-headed hoe" and knocked that muh-fu*ker right out!

Michael Keith Gilley, 51, of Hog Jaw Road was arrested for DUI following a traffic stop on Hog Jaw Road about 1:41 p.m. May 31.

*That's right...Hog Jaw Road in Arab, Alabama. Have they no respect for Arabs in the naming of their streets? Roll Tide!!!

..... dude, I gurantee that those Alabamites knew exactly what they were up to when they named that town!......

Damn if this place isn't fun to hangout in...Go IRISH!

I thought "VOLS" was short for Volapuk...something to do with the way they speak in the south...