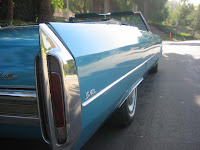 Dear Readers,
I'm sorry. Sorry for making you wait these too many days (since 8 July), to hear more from Uncle Bob, and to find out what kind of a new car he got. Remember how my Dad got a new 1966 Chevy Chevelle station wagon and Bob was not impressed? Uncle Bob, not to be out-done, now opens his garage door to show us what he has inside...

UNCLE BOB- Enough of your shit! Look what I got!
(Uncle Bob slowly opens the garage door)

I see the parked beauty and yell for my brother, Joe. My Dad whistle's a long, low, whistle.
Now my brother, Joe, enters the garage. His eye's have almost never been bigger, except when Uncle Bob beached the boat doing 100+MPH at the Suisun Slough maybe, and almost got us all killed. Joe smiles a huge nervous smile. "Look at her! Just look at her"!, I said. My Dad, Joe, and Uncle Bob's faces all beam. Me too.

DAD- Damn, Bob! You bought the Queen Mary! You must have done some serious overtime out at the ship yard.

UNCLE BOB- (says with a big shit-eatin' grin) Worth it don't ya think?

DAD- (whistles again) A blue convertible. Well, since you are between wives...you haven't remarried again, have you, Bob? You are still single, aren't you?!

UNCLE BOB- I mean it! I'm swearing off 'a marriage for good.

DAD- I'll drink to that!

At this point Uncle Bob get's that twinkle in his eye, pulls out his car keys, walks over to the huge trunk of the new car and opens it. There in the trunk, is the magic silver colored cooler with the 7up logo on it. The cooler is chock full of Miller High Life Beer, on ice. We admire the size of the trunk, then Uncle Bob helps himself to a sodie and hands Dad a beer. They drink and smile. Me and my brother Joe just circle the car, a beautiful blue, 1966 2 door Cadillac, Fleetwood Eldorado. It was a convertible! I looked inside, and there behind the drivers seat was Uncle Bob's empty Hill Brothers 5 pound coffee can he kept for pit stops (bladder relief). When Uncle Bob saw me looking in at his infamous coffee can, he just busted up and told me that some day, if I worked real hard, and didn't bother marrying too-many women, that, I too, could have such a Cadillac, Fleetwood, Eldorado, convertible complete with a Hills Brothers piss can. About 4 or 6 beers later Uncle Bob announced...let's take her out for a spin. Seeing as how Uncle Bob only had about 4 or 6 beers in him, I figured we were safe. We jumped in... (to be continued)
Posted by JihadGene at 8:54 PM

Queen Mary indeed! (Does this story end with the car in a body of water too?) Okay, I'll wait patiently.... I'm sure it's a great story wherever it ends.

OH.MUY.GAWD.
I'm drooling with envy! My auntie always had Caddies and they were beeautyful!
Nothing rides like a Caddie!

OH I was at the Mechanic's the other day and there was a '65 Chevy sitting there. Not a convertible and a beaut like your Uncle Bob's, but nice anyway.