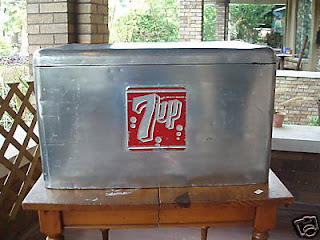 Dear reader, if you read this please ensure that you have first read Parts 1 through 6, so you'll be both up-to-date-on the pretty-much-true story and appreciate the "full effects" of Miller High Life. Two magnificent ladies (my only two readers) had some wonderful comments and I will try to indulge them in this piece.
Now, just how much Miller High Life Beer did Uncle Bob have?
Uncle Bob never ceased to find cold beer, SODIE, as he called them, in that cooler! Nor did Uncle Bob never find "a cold one" anywhere, within the light blue/over white 16' fiberglass boat, which seats 4 back-to-back, and powered with the mighty Evinrude 60HP outboard motor capable of blowing-by anything the US Coast Guard may have afloat, or in his souped-up 1965 or '66 Chevy Corvair-Monza-Spider, with 15HP more than the mere Chevy Corvair.! I don't really know why. Gee. Could it be all those frequent stops at every beer and bait shop from Lake Berryessa to the Suisun Slough, that kept him so well stocked? Nawww. Uncle Bob and my Dad were suckin' down them beers like they were North and South Koreans trying to out-do each other at Panmunjeon, or more like two kids at the dinner table trying to out-eat one another.
Where the hell was I?...
Oh yeah! The 7up ice chest, chock-full-'O-beer (Miller High Life). I don't know but maybe if I called that radio show called Coast to Coast with that Art Bell guy, maybe they'd have the answer as to how that cooler stayed so full'a beer? Maybe Elvis, or space aliens, Big Foot, Sonny & Cher, George Bush, or crop circles, Rosie O'Donnell, a ghost, or illegal aliens working for Carl Rove & Mitt Romney, had something to do with it? Maybe Uncle Bob even made a deal with the devil? Hell, I don't know! The only thing that comes to MY 11 year old mind, is that he had a MAGIC 7up ice chest! I can't quite explain it, all these years later, but as I reflect on it, I'm sure.... IT. WAS. MAGIC. Like "Felix the Cat" and his "Magical bag-'O-tricks", it was Uncle Bob, in an eternal state of Buzzzdum, thanks to that shiny silver-colored cooler, with the big 7up logo on the front. Perhaps Suisun Slough is the Bermuda Triangle of the Pacific, maybe? Intriguing, though it may be, I must return to the story...
Well, after getting our slime-colored "beached boat" back into the waters of the Suisun Slough, we started chug-chuggin' back to the boat ramp. Now mind you, the "once powerful" 60HP Evinrude outboard engine is sucking oxygen, putting out 2 and 1/2 HP maximum, and has begun spewing a strange blue/black smoke, with just-a-hint of flame. We... the fearless crew of the "Uncle-Intoxicated Beached and Bird-Mauling Titanic", are covered pretty much head-to-toe in this blackish-brownish-greenish-greyish slime, from the neck down. Yes, it's slow- going and I make sure we are not dragging the anchor. Uncle Bob and my Dad drink another Miller High Life. I look at my brother Joe-Bob. He looks tired but gives me the nervous smile. We approach the dock. I look ahead and see...
(to be CONTINUED)
Posted by JihadGene at 7:44 AM

The suspense is killing me. This story gets better with each installment.

I love the magic 7-Up chest!