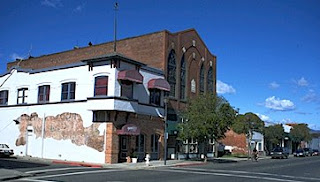 Dear reader if you did not read "Fishing With Uncle Bob" parts 1 through 7up then please do so now, in order to get the full feel of this pathetic but mostly true story....
Let's recap-
It's early summer 1966 in Central California and my intoxicated Uncle Bob is playing chauffeur driving the infamous 1965 or '66 Chevy Corvair-Monza-Spider pulling a 16' fiberglass boat, light blue over white in color, with seating for 4 back to back, powered by a mighty 60HP Evinrude outboard motor, capable of reaching speeds that Star Trek Capt James T. Kirk, would envy. So far Uncle Bob has successfully driven us off cliffs and roadways from Lake Berryessa to the Suisun Slough, all the while pissing in a Hills Bros coffee can, drinking Miller High Life beer with my Dad (who had to be drunk in order to tolerate Bob), laughing, joking, and occasionally steering the Chevy Corvair-Monza-Spider. We dragged anchor all over Lake Berryessa. Did a spectacular "sideway's launch" into the Suisun Slough that warranted a standing ovation dockside! Later, while exceeding speeds well over 100MPH, Uncle Bob (our drunk fishing guide and Captain) beached the boat! We survive all this and have finally pushed/pulled the boat back into the water with the help of a rich guy in a cabin cruiser. We...my Uncle Bob, my Dad, my brother Joe-Bob (age 14), and me (age 11), are now all covered in this slime from head to toe. It is a grayish kinda black colored sludge that is not only all over us but it's all over the once cute boat. If ya ever saw the movie Ghost Buster's, well, to sum it up, we were SLIMED! A pathetic lot indeed. Now as our once mighty Evinrude outboard huffed and puffed blue-black smoke, and belched fire, we approached the Suisun City boat ramp.

Now I don't know why, the Suisun City Fathers, held their annual Suisun City Father's Day Parade, with a kick-off time of 6PM (PST) on a Saturday, but believe me, in the early summer of 1966 they did. And, likewise, we (Uncle Bob, Dad, Joe-Bob, and I) had no idea that the parade route began in front of the Suisun City Boat Ramp/Dry Dock and Laundra-O-Rama, but it did. It was about 5:50PM and the city's populace was gathered with all their parade floats and the Suisun City High School Marching Band formed up, near the dock. As we approached I could see the crowd. I saw the rich guy in the cabin cruiser (the one who helped pull us into the water) point in our direction and the crowd ROARED! Boats big and small honked their horns! I was never so embarrassed in all my non-adult life. We docked. People were smiling and laughing! Some wanted to give us a pat on the back but, due to our slimed state, no one dared. I just wanted to get into the car and go home. Uncle Bob now announced, over the cheering crowd, that we (my Dad, Joe, and I) would stay in the boat for the ride home as he did not want to get his Chevy Corvair-Monza-Spider, black in color w/ red interior, with a full 15HP more than a regular Corvair, dirty. Uncle Bob swaggered (staggered) to the car with the 5lbs Hills Bros coffee can in hand. He then put the can to good use (took a leak) and proceeded to strip down to his black socks (held up with garters), white boxers, and white sling-shot T shirt. The crowd went wild!!! Now, I don't know where he got it, maybe the glove box, but I now saw Uncle Bob in the Chevy Corvair-Monza-Spider drinkin another Miller High Life. This time, focused on his mission, Uncle Bob backed up the boat trailer like a true professional and got the boat loaded with ease. Our audience ate it up, appaulding his backing skills! Uncle Bob waved his Frank Sinatra looking hat at them! The good people of Suisun City insisted we lead the parade with Uncle Bob's Chevy Corvair-Monza-Spider and boat. I looked to my Dad who gave me a tired Marine grin and pulled another Miller beer outta the legendary 7up cooler. I looked at my brother Joe who was smiling his wonderful nervous smile. What the hell. I waved at the crowds, along the parade route, and began throwing fishing tackle and bait to the kids. I did that all the way out of town. I watched the anchor being dragged behind, in the low-setting sunlight.
I've never gone back to Suisun City, but I will never forget her. Try as I might.
I'll never forget her.
The End
Posted by JihadGene at 11:22 AM

No story can be complete without at least one "and the crowd went wild" part.

This story is a thing of beauty and a joy forever. Let me guess: when it was time to read compositions in front of the class, everyone smiled in happy anticipation when it was JihadGene's turn to read his story.

I busted up over many parts of this, but I've gotta say the image of a young JG tossing tackle and bait to the eager kiddies, with a draggin' anchor following had me grinning ear to ear.

Thanks youse guys! Truth is stranger (funnier too) than fiction!
RYLT!
JG

ROFLMAO!!! Now that it's over and far in the past... holy crap! It's a wonder you all lived through it.