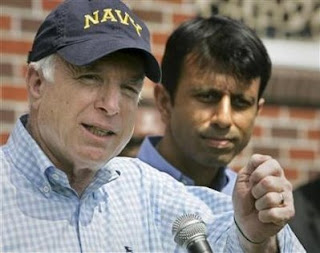 WANG- How so, Most Keyboarding One?

KIM- Look at plictures! Just fill in the blanks!

WANG- I don't follow, Great One. This is a picture of John McCain visiting the Governor of Louisiana, Bobby Jindal.

KIM- Okray, I'm forget you own-ree a 7 star general. Now look! I can glean intel from this plicture (as seen above)....here goes..."what they said"...

SENATOR JOHN McCAIN- Hola mi Amigo-Governor! Se habla AMNESTY! Quiero a GREEN CARD, Amigo? I can hook you up! Need a US NAVY boat-ride across the Rio Grande?!! No fences on my watch!!! NO PROBLEMO!!!

GOV BOBBY JINDAL- Hola? (WTF?) I'm sorry, but I don't speak much spanish, or whatever else you're speaking.

McLAME- No comprende, Roberto? And you call yourself the Governor of the Mexican state of La Fiesta? What are you, EL POLLO LOCO?

JINDAL- I am the Governor of Louisiana, Sir. My name is Bobby, not ROBERTO.

JINDAL- What do you mean?

JINDAL- Oh. If you must know, I'm Indian-American.

McLAME- I get it now! You're an Indian!

McLAME- Sure you're an American. A NATIVE American! Want to smok'em peace-pipe?
What tribe are you with? You got a casino? When I'm Commander in Chief of the Navy I'll put Indian Gaming Casino's all over the coast! I'd offer you a beer but I know how you are with firewater. Once I'm President though, we'll mak'em big Waumpum!

JINDAL- STOP! I was born in the USA and many of my family are origionally from the country of India.

Where's his dot and his combine...?