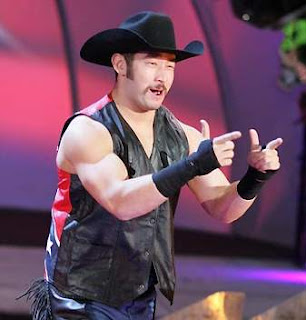 This photo is of either the WWE Wrestler Jimmy Wang YANG or that of the new President of South Korea LEE, Myung Bak

****THE FOLLOWING WAS TAKEN FROM THE (NORTH) KOREAN CENTRAL NEWS AGENCY (no B.S.)-

Pyongyang, May 8 (KCNA) -- Lee Myung Bak of south Korea betrayed his true colors as a die-hard sycophantic traitor during his junkets to the U.S. and Japan when he sold off the dignity and interests of the nation.
He called south Korea "a stock company of the U.S." and invited the Japanese king to Seoul while calling him "emperor," thus bringing shame to the nation.
In less than two months since he came to power Lee reduced south Korea to a stock company of the U.S. monopoly capitalists and freed Japan of its responsibility for the redemption of the past crimes. This is just the tip of iceberg of his sycophantic and treacherous deeds.
He is a die-hard pro-U.S. and pro-Japanese traitor devoid of the spirit and the dignity of the Korean nation.
After his inauguration as "president" the spirit of "By our nation itself" has grown weak and the past era of sycophancy toward the U.S. and cooperation with outsiders has been brought back in south Korea.
Before taking office he had called for the tightened south Korea-U.S. "alliance," worrying over the "impaired alliance." He is now strengthening the tie-ups with outsiders, away from serving the nation's interests and dignity.
The Lee Myung Bak regime agreed to increase the costs for the U.S. military presence in south Korea, dispatch troops to Afghanistan again and import American beef. These are a clear proof showing that the regime is set to serve the outsiders for the "relations of strategic alliance in the 21st century."
A particular mention should be made of the fact that his group has called for "friendship" with Japan which still remains a sworn enemy to the Korean nation.
The group considers it "pragmatic" to bury into oblivion the Japanese imperialists' history of aggression on Korea. What a far-fetched assertion it is.
To this end, it has defended Japan's past crimes and even stood in the way of editing "biographical dictionary of pro-Japanese elements," talking about the "new era of cooperation" and "orientation toward the future."
Traitor Lee is little different from the traitors in the last century who sold off the country to the outsiders.
Such group of traitors will bring nothing but shame to the nation that has been undergoing the tragic division for more than half a century due to the outsiders.

****KIM Jong IL's pissed off at the new president. I'm RUV it LOOONG TIME! JihadGene
Posted by JihadGene at 9:42 PM