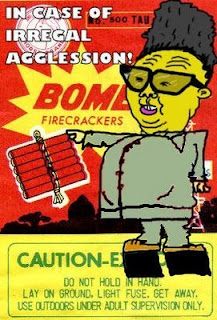 Datesline DPRK (NorKo Newz)-
Spotted on the Al Gore invention, the WORLD-WHY-WEBB, is BLACKFIVE'S own Matt Burden. And wheres in the wirld is Matt? CHINA! CHINA!! CHI-frickin'-NA!!! Ok...CHINA has O-RIM-PIC's and Great and Glorious Reader KIM Jong IL has busted his KOON-DINGIE workings with those CHI-KNEE's on the welcrumbing of SPORTS TORCH! Some dumb-ass NORKO DEFECTOR, who was in SEOUL, even did that Buddhist Bar-B-Que thing that was so popular in the 1960's (Vietnam). Obviously the former Norf Korean was so miserable living in a starving and horrible Souf Korea, that he torched himself outs of love for the Great Reader!

SPEAKING OF LOVE-
Why did Matt, of Black Five Dot Net, not contact Great Reader KIM Jong Il when nearby in CHINA?! Our Great and Magnanimous Reader would have given Matt the full tour of PyongYang! Great reader KIM Jong IL was quoted as saying, "I'M TAWKING THE DE-RUX
TOUR! TOO! GOLF WITH TIGER KIM! ROLLER-DISCO! RUSSIAN ROULETTE! A NO-HOSTAGE BAR AND A COMPLIMENTARY FULL INSPECTION OF KIM JONG IL'S JOY BRIGADE (with junk-on-the-bunk)! WHY YOU FORSAKE'S ME, MATT? WHERE'S THE RUV, BRUDDA? SHOW ME DA RUV!"

MATT SHOPS IN CHINA FOR $150 ROLEX-
Matt says, "I am tired of being harassed by vendors who all claim "Best Price!" and whip out their calculators like I care about their wares and try to charge me $150 for a $1.50 watch."
What a tight-ass! Price 'o rice going up and all, and he's haggling price?! It's a genuine "LOL-Lex" watch, for OBAMA's sake! Typical rich white American blastard!

KIM JONG IL'S BOTTOM LINE-
In a rabble-rousing Prison Labor response, our Great Reader has introduced a new product to the free (for-five-dollah) world! Now for only $4.99 (pruss CA. sales tax) you can now have DPRK FIREQUACKERS! PaysPal Okray! No 'Merican Expless!

Matt mentioned you were pissed at him on Blackfive today.

This is what I call entertainment.

That was worth the price of admission. (China's only important because it's next to Korea, after all.)