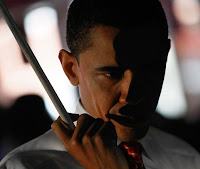 KimmyNewz/Koweefornia- It has been rumored that the traitorous (to Hillary) presidential-hopeful, Barrack Who's-Named Obama, carries a "magic stick" from town to town. This is in the same fashion as the Hero of North Vietnam, the Herman Munster-fied John F'n Kerry, who had a magic jungle-hat secreted in a briefcase.
Barrack has been seen in all 57 states with the "Magic Stick"! Our gloriously gargantuan Great Reader KIM Jong IL says "Obama has pointed this sharp shtick once to often in the Americans people's faces, who dilligently toil for the most powerful agency in the flea-world, the I.R.S.!!! Be warned Oblama!!! The pointings of any shtick at the peace-ruvving, nuke-testing, wocket-launching, DPRK will only sucks-seed in poking his owns self in buttocks! The powers of this shtick correlates directly with the teachings of the Trinity United Church of DoJo-Nija-Masters, of Chicago, Illinois! KIM Jong IL is on to you Reverend Wright! I'm on it rike vomit! So Barrack Who's-Named Obama, for your unwarranted black-hearted attacking of innocents peoples (pool playaz) I'm sending in the "World Famous" HILLARY CLINTON ARMY to a state near you! I see nothings butt OPERATION CHAOS in your future! Enough of this shtick"! JG
Posted by JihadGene at 7:52 AM

Makes me laugh every time. TOO clever!