Dumb and Dumber: George Bush Tells Arabs They're Running Out of Oil! Opens a can of Whoop-Ass on American Diesel & Gasoline Consumers Instead! 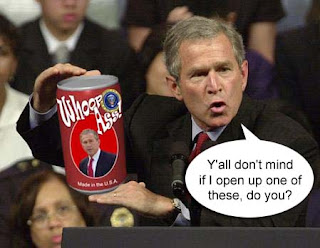 Just saw this headline on DRUDGE saying, "Bush warns Arab Leaders: You're running out of oil..."
What's a barrell of oil goin' for right now (Sunday night)? And we still, sure-as-hell, aren't drilling!!! WTF you doing Georgie!!!? Hittin' the booze again? It's $4 a gallon in Jihad City, California, and that is for the CHEAP STUFF, bitch!!! You think statements like that are gonna bring oil prices down, ya dumb shit!? Are you moving the Crawford Ranch to "DUBAILAND" or what? Sheeezzzzzz...I can't afford anymore of this compassionate horseshit conservatism.What's oil gonna cost tomorrow? Will I be able to buy an ear of corn at the 4th of July picnic? Screw that... guess I'll just drink! JG
Posted by JihadGene at 9:23 PM