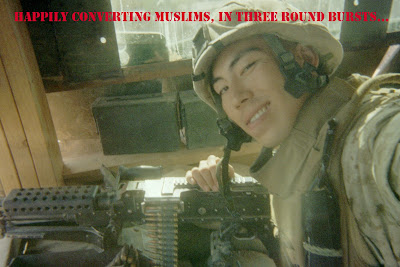 CHARLIE-IN-IRAQ , that's what my 12 year old son calls him. Hell, it's what my wife and I call him. When praying for Charlie at the dinner table, it was always for CHARLIE-IN-IRAQ. When signing and sending a card, or with me, my son (Ben) filling up a flat-rate USPS box with goodies that would neither explode nor melt, it was for CHARLIE-IN-IRAQ. That's his name in our house. It will always be that way. He's been named... like when family call you Sport, or Bud, or Bone-Head, or Tiger! ... It's just CHARLIE-IN-IRAQ. That's how it is. Years later, I know if my son looks through these cyber-photos, and see's US Marine CPL Charles MECHLING III, he'll say...there's CHARLIE-IN-IRAQ! Charlie is the son of a friend I met through the Patriot Guard Riders. Charlie's Dad, I know as "Chief". To him I'm Jihad or JihadGene. I cherish his friendship. Chief is an American, a Former US Marine
(Beirut Barracks), a Native American LAKOTA Indian, and caucasian. Chief loves his country and his people...which includes his son Charlie. CHARLIE-IN-IRAQ has those blood-ties plus his mom is Korean (small world). Put 'em all together and stand back(any and all enemies of the United States of America)! I first met Charlie on a Patriot Guard Riders "Welcome Home" ride, back from his 1st tour in Iraq. It started at Camp Pendleton and eventually ended in Stockton. One of Charlie's supporter's was a teacher from his high school, who was always impressed by Charlie's warmth and great qualities. Man that's refreshing!. That's Charlie! So while Charlie got busy back home (Camp Pendleton), I got involved with SoldiersAngels thanks to BLACK FIVE (that merry band of Saints & Son's-A-B*tche's) who put out a call for Soldier's Angels to support some 3,000 US Marines with the 13th MEU, I jumped in. Three months later the Fight'n 13th was home. Some months later Chief e-mails me that Charlie's back in the fight (Al-AnBar Province again) and could use some Coppenhagen and socks. Ahh... the life of a Marine Infantryman! So I couldn't wait to join in and get my 12 year old son involved picking out stuff for CHARLIE-IN-IRAQ. Ben, always came up with some great ideas for stuff/snacks that could survive the harsh enviornment and weather. A little later, guess what? CHARLIE-IN-IRAQ wrote us a letter! We will always treasure it! This great kid, who's Dad (Chief) says, "My son is a carpenter, he carries a S.A.W." (squad automatic weapon), took time away from his busy day and wrote. During this tour CHARLIE-IN-IRAQ lost his best friend MATT, from Houston,Texas to an IED. I wrote to CHARLIE-IN-IRAQ, about his friend's death. I don't remember what I said but hoped it would help, and it was hard to write. Some months, packages, cards-and-letters later, CHARLIE-IN IRAQ, completed his 2nd tour and is back at Pendleton.
You ask us (my son and I) to name a great W.W.E. Wrestler and we'd give you different answers. Ask us who's an American Hero, and together we'll tell ya, It's "CHARLIE-IN IRAQ"!!!.
JihadGene & Ben

*Please join or give to Soldier's Angels. JG.
Posted by JihadGene at 6:27 PM

Always a hoot to hear "The Great Reader" shouting the latest in N kor blasphemes.. Grateful as always for all you did for my Warrior son and all the others in Harm's way. You and Ben are the Best - (ur wife too!..lol). Take Care, Kola,

It's been a blessing! When I get pissed at some small crap I remember all the Charlie's & Cheryl's in Harm's Way... and say to myself...I got it easy, so easy, compared to our wonderful Soldiers, Sailors, Airmen, Marines, and Coasties! You have every right to be proud of that son you raised...my own, CHARLIE-IN-IRAQ.

God Bless and protect Charlie-In-Iraq and all the men and women in harm's way.

If Charlie rides on any Big Windy Chinooks he might just run into my son. *grin*

Tell him I said - take care.