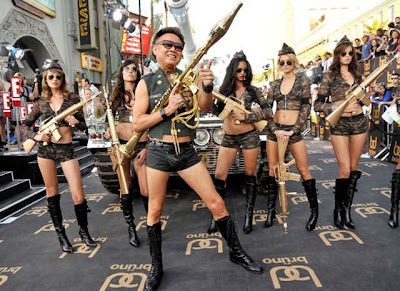 Meanwhile back in Norf Korea on the north side of South Korea's goal post (the DMZ) it's Korean New Year's Day and we find Great Reader KIM Jong IL, thinking and drinking, NFL football...LOOONG TIME...while watching cartoons on TV.

WANG: Which brand do you want, Sir? There are so many...

KIM: The green and yellow, white and green, purple and white one...of course!

KIM: You means to tells me you never herds of OLD NUMBA #4, made by Betts Brewery?!

KIM: Why...it's the beer that made the Green Bay Jets of New York City, Minnesota famous!


WANG: I should of known.

KIM- Wanna watch some TV with me, General Wang?

WANG: Uhhh...well...no thanks, Sir. I'm not into Spongebob Squarepants.

WANG: Anything else before I go, Sir?

KIM: The K-9 channel... I want to see sneak previews of the 2011 Westminster Dog Show. I'm heard Michaels Vick is gonna be one of the judges!

Another gem fermented from the mind of our Great Reader.

Gene, you are the King of Kim !
heheh

WE ARE THE CHAMPIONS, MY FRIEND!