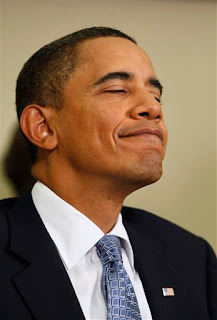 And now, a word from the President of the United States:
My fellow Americans, I have taken time away from my busy holiday schedule to provide you with a teachable moment in US history. Today, September 2, 2010 marks the 65th anniversary of a date only important to Conservative voters. For it was on September 2, 1945 that Japan's previously un-nuked proud Emperor, Mr. Toyota HitachiHirohitoSuzukiSushi, was forced by American war generals to sign the devastating papers of surrender live on CSPAN! The horrific surrender ceremony was held aboard the USS Arizona...or some other US Army aircraftbattlecruiser, named after one of our 57 other states. The poor Emperor was sooo devastated by the ugly Americans that it took more than a dozen Navy Corpsemen to revive him. After signing the papers the Emperor was immediately transported to Guantanamo Bay, Iraq...where he was made to do Kabuki theater performances for the entertainment of evil female prison guards. The lesson here is to know your history, my fellow Americans. Thank you for your time.
(Hat tip to Katy Ward who inspired this post looong time!)
Posted by JihadGene at 7:33 AM

And then MacArthur put them all in slave camps where they were forced to make campy monster movies for our imperialist entertainment.

That's not far off.

It would be funny if Obama wasn't likely to say it.