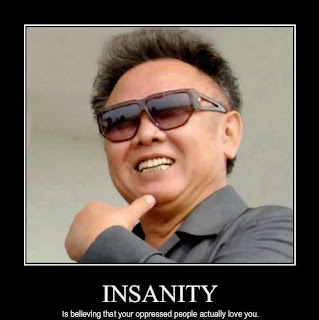 Meanwhile on a beach north of the sunny beaches of South Korea we find Great Reader KIM Jong IL contemplating the latest intel gleaned from the milblog BLACKFIVE...


WANG- Right here, Sir! What's wrong?! You didn't torpedo another ship did you?

KIM- (pointing to computer screen) Naw...not yet, but just rook at Brackfive's security bweech of OP-SEX regulations! They give in-slider trading information on former Afghan War general, General McChrysler! See that?! It say that that "pushie" (Norf Korean talk for pussy) drinks beer with flute in it!!!

WANG- Okay, Sir... so General McChrystal drinks beer with fruit flavoring in it. Now what intel can we possibly learn from that?

KIM- That General MacChrysler...like Chrysler... is really an illegal alien piece of crap made in MEXICLO!

WANG- You're saying General McChrystal is a Mexican, Sir?

WANG- How can you possibly say that, Sir?

KIM- Numba 2 fax: Illregal aliens works cheap. You can screw 'em all day wrong and pay them very little money. I bet the entire US military is a bunch of illregal aliens the way they get paid!

WANG- I've seen their pay. You may have a point there.

KIM- Now...fax numba tree: The USA is doing good in World Cup soccer. You think those are boner-fied Americrans on that team and not a bunch of Mexiclans?

WANG- Okay. You got me on that one, Sir.

KIM- Of clourse...but no flute in it!

KIM- Hey! Yous forgot to put the little umbrella in it!

No fruit in the beer.

When we were 15 or so, some local beer maker put out something called Hoppengator. Beer with lime juice in it. The first sip was interesting. The 2nd got old, and numba 3 was puke city.

No fruit in the beer.

I like fruit in jungle juice. That is way different though.

Hilarious bit by The Great Reader too.

I don't want oranges, lemons, limes, in beer! Beer ought to taste like beer!

Maybe Great Leader would like to hire General McChrysler? ;-)