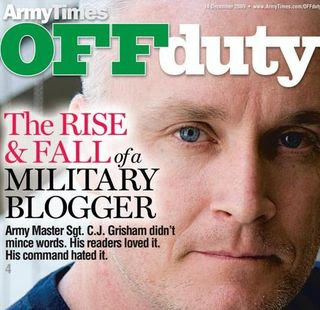 Meanwhile back in his palace, surrounded by his army in Pyongyang, we find Norf Korea's Great Reader, KIM Jong IL surfing the internet's whirl-why-web and checking up on US milblogs....

KIM- What?! What in the name of Sam's Club (Sam Hill) is this? U.S. Milbroggs Silent Today? General Wang! Front and spinster, right now !!!

WANG- Hmmm...it says,
"Army Master Sgt. C. J. Grisham has always led from the front, from combat that earned him the Bronze Star with V device, to doing right by the men he led. His honesty won him readership and respect, from the White House on down. Yet, when he stood up for his children in school, his command did not stand by him."

KIM- And you thought stuff was only all FUBAR'd in "The Glorious Norf Korean People's Army"...didn't you, General Wang?

WANG- Well Sir, I must say it does sound like something our North Korean Army officers would do to one of our own....not like the Americans I've come across. Americans, who cherish their freedoms, Sir.

KIM- Wonder what that freedom stuff is? Oh well, I guess the Americans like my weedership (leadership) style...huh, General Wang?! I'm be one hell of a role model!!!

KIM- What was that, General Wang?

Read about C.J. and this mess right HERE. To donate via PayPal you can log into PayPal on your own, go to the send money page, and put in his email: dj_chcknhawk@yahoo.com
You can also send donations directly to:
Grisham Legal Fund
c/o Redstone Federal Credit Union
220 Wynn Drive
Huntsville, AL 35893
Please write "Grisham Legal Fund" in the memo line if you use this option.

Milblogs have been a vital link in getting accurate news and information about the military, and military operations, to you. Today, many milblogs are gone and others are under attack from within and without. Today, you have the chance to imagine a world without milblogs, and to do something about it. Make your voice heard by writing your congressional representatives and others, and by making donations as you see fit.

The battle for freedom of speech and the marketplace of ideas is fought on many fronts and in many ways. Without your help, the battle may well be lost. Let's fight this.

I BELIEVE IN FREEDOM
I BELIEVE IN DOING THE RIGHT THING
HELP US FIGHT THIS
FIGHT IT STRONG
ARMY STRONG
HOOAH!!!
Posted by JihadGene at 7:16 AM

Wow. How weird does it get before people stop feeling threatened by the truth...

Why anyone under the command of the Narcissist in Chief would blog under his own name is beyond me. I've been out for 19 years and I never would have dreamed of blogging under my real name. I'm not saying he had it coming to him ... in fact I'm saying there should be a certain paranoia that goes along with milblogging, given that you if you're active duty, YOU WORK FOR THE FEDERAL GOVERNMENT, a government that's never to be trusted.

My rule of thumb is, unless the MSM is giving you bags of money, go as incognito as you can, no matter what your profession is.