Ben, Matt, and a Good Man 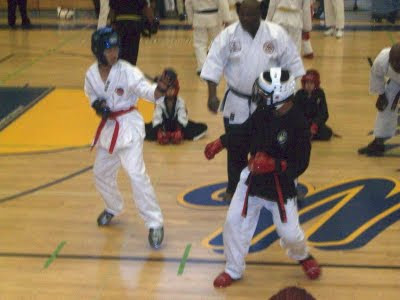 My SOUTH of Fresno son, Ben...wearing black shirt & white helmet... was violently attacked by a heathenish aggressor named Matt, wearing white, from the NORTH (Fresno) at the Marc Unger Karate Tournament in Exeter, CA.! There were many good battles and my son lost by one point. Matt was awarded the title of "Super Grand Champion" that day (Saturday, 11-14-09) and he truly deserved it! Ben and Matt are both 14 year olds. In the next few months there is a karate tournament in the scum-sucking North (Fresno). Ben's only wish is that Matt will not turn age 15 any-time-soon as Ben goes north to Pyongyang (Fresno) in hopes of a rematch in the next few months. It's on!!!

Now...I told you all this but I wanted to tell you too about Pastor Marc Unger. Mr Unger is a US Army National Guard Chaplain. His son, US Army National Guard Specialist, Daniel Unger was killed in Iraq (May 2004). Under fire, Daniel helped rush some Iraqi civilian workers to safety before seeking shelter for himself and was mortally wounded in the process. Spec Daniel Unger put others before himself and died helping others. He was posthumously awarded the bronze star for his bravery that day. At the Karate tournament there was recognition of active duty personel, their families, and our nation's veterans. An opening prayer was given by Mr Unger, the pledge of allegiance said, and our national anthem sung beautifully by a young lady. It was moving! If you want to read about a man making a difference then please read about Army Chaplain and black belt Karate instructor Marc Unger HERE.

God bless the Unger family, our troops and their families... looong time!!! JG
Posted by JihadGene at 2:17 PM

Good for Matt for winning and good for Ben for trying his best! Next time, who knows?

I love events that open with the Pledge of Allegiance and/or the National Anthem. It's the only reason why I still go to homeowner's meetings. ;)

May God bless the Ungers.

You know, it's easier with guns. Quicker too.

BTW ... you have not responded to my request to help me create the most infamous band of rightwing teabagging racist basterds ever ...

The Arab-sheep pic is yours to use, sir.

Good job to them both and just remember, You can't kick ass with both feet on the ground.

Hey, the son of Jihad Gene has to be a winner!

Blessings to the Unger. Their continued good works in the face of grief serve as a good example to others.

Yes, God Bless the Ungers and those like he an his family.

I've been down and out with the flu and watched a few houses of MOH winner stories on the Military channel. Unreal stories. They all just say they were doing their job.

Big thanks to the Ungers for their service and dedication.

God bless them all and congrats to your son for doing his best!

Thanks for the link to the Ungers. Big gratitude to them and all that serve.