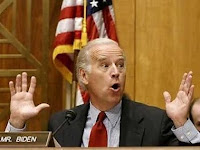 I found out that India is getting some nuke boats (nuclear powered submarines) thanks to Black Five's writer extraordinaire, Subsunk. Hmmm...I wonder what the White House has to say about this?

Meanwhile deep inside the Vice Presidential Command Bunker, located at the Lompoc Federal Penitentiary, the following communique has been sent and intercepted by Team JihadGene...

Hi friends...Joe Biden here! Since President Obama's teleprompter seems to be broken I will step in (in it) and say that the Indians should stick with the things they know best....like peace pipes, pottery, blankets, beads, cheap cigarettes, and casinos. A deer-skinned canoe, though powered and armed with nukes, when submerged, can only do so much. I must blow balast and leave you now! Gotta catch a red-eye flight to Calcutta, Ohio and kick it with some cow-loving Hindu's! Oh! Calcutta! Calcutta...where I must lodge a formal complaint against tainted 7-11 Slurpees and city full of fu@king telemarketers!

Posted by JihadGene at 9:23 AM

Your sources are as impeccable as ever. Now we know what Joey is up to. ROFLMAO...

Compared to Obama, I wouldn't mind ole Joe as President. He'd be a laugh a minute that's for sure.

I'm surprised he didn't go off on some tangent about Oh! Calcutta! the nudie musical.

I remember when Disneyland had a bigger sub fleet than most coastal countries...