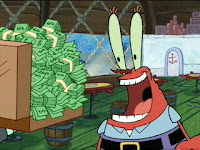 I have a clothing store. I sell gang-banger's the clothing they want. Lots of blue and red colors. I sell the stuff all other big retailers don't (and won't) and some of the same stuff that they do sell. I sell brands like LowRider, Dickies, Ben Davis, Hostility, Ecko, South Pole, Big Daddy, Cali Ink, FabriCali, Mob Inc., Big House, and more. So here I sit... stuck with a few Obama T shirts but I have made good dinero ($) off of them. Need one? Men's or women's? I got 'em. Cheap too! What you do with it is your business. I don't wanna know! I also have 24 T shirts that I received from the Ben Davis Company for FREE...that's GRATIS... for you speakers of Mexican talk. It seems they ran a T shirt showing Ben Davis (a gorilla's face) with the saying..."Ben Davis for President 2008"and NO, I did not buy any for fear of being called a racist. In all fairness the Ben Davis Company has had a gorilla on their label for many years (since the 1930's) and has made such T shirts during the 2004 presidential election. It apparently did not go over well with the Obama supporters as the Ben Davis Company ened up in the red on these. The Ben Davis sales rep called me in late October and shipped me 24 of these shirts for free. Gee... ya think the other retailers didn't want to carry the shirt?! Bottom line... I think they (Ben Davis Co.) lost their asses on this shirt but these T's may be a real collector's item in the future...ya just never know. So where am I headed with this, you ask?
Well... a new day has dawned in Washington D.C. and President Obama is one busy beaver trying to community organize Guantanamo (Gitmo). The B.O., his-own-bad-ass-self says GITMO will close in 365 days. That's one year for you Public School grads! Now some of you may be distressed that old JihadGene occasionally looses money... but this news is all good in the hood, out here! Ya see, I have a new T shirt design in mind...what do you think? In the words of Sponge Bob's Mr Eugene Krabs...."I'M RICH"!!! 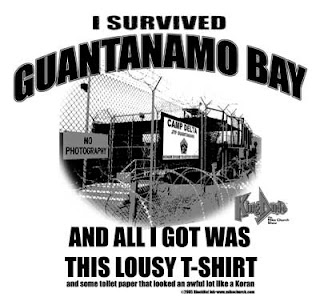 I would love to have one.

I would LOVE to have several.

I would definately buy one! If you are serious about it, let me know!

Let me know when they go on sale ;)

I'd buy one of those!

It works!! I am jsut waiting for B.O. to announce that they are planning to take all of the Gitmo detainees to Disney World...

OMG - excellent. ROFLMAO. I'll buy one. Of course if I wore it around here, I'd likely have stones thrown at me by the "peace and love" crowd... but damn it might be worth it.

You aught to make a mint. Of course with the economy like it is, a mint may be necessary to have any coin to jungle in your pocket.

The shirt could be popular with both the detainees and the military stationed there as babysitters.

C Bob- Drop by and I'll give ya a couple of my Obama shirts absolutely free + a minor $2,000 charge for my not shipping it to you.

Deltabravo- See ya around BlackFive!

SK- You are in luck! They are free for $1,000,000. Contact Bill at the Clinton Global Initiative for details.

Maeve- You're good, in a Witchy kinda way!

Navy CPO- You get a free one! Your money is no good here. Now...can you hook me up with an F-18 with low miles? I have all the ordinance and fuel. I just need the aircraft. Thanks for all you do! Go Navy...quit beating the hell outta Army!

Rich- I've never been to Disney World. Can I go too?

Teresa- I quit getting stoned long ago but I still eat pizza!

Joated- You got it! Stay warm out there!