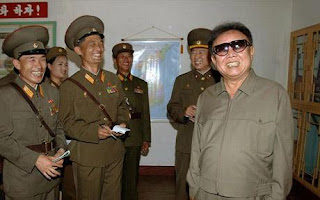 Meanwhile somewhere NORTH of the 38th Parallel in a land once known as "The Land of the Morning Missile Launch" we find Norf Korea's Great Reader, KIM Jong IL with his aide-de-camp, 7 Star General Wang, feeling better and on the docks at Nampo City, DPRK inspecting North Korea's latest Halloween shipments bound for Damascus and Tehran...

KIM- For looking thru burka's, of course! My numba 1 seller in Islamabad.

KIM- Inflatable sheep with thong and veil, the "Ali Baa-Baa" model... 40,000 units.
A sure fire hit with the Taliban!

KIM- 12,000 units of the "Tickle Me Maverick, John McCain VooDoo Economics Doll" which calls US Voters "My Friends" while he simultaneously throws their tax dollars down some rat-hole called Wall Street.

KIM- 120 units of Senator Joe "Plugs" Biden costumes. Comes complete with 1% of the US vote.

WANG- He looks like Sam the Eagle to me....check.

WANG- I must say you look great, Sir! Ever since George W. Bush has considered taking us off the Axis of Evil list, your health is much improved.

KIM- You knows it! President Bush has gone from being a Lame Duck to a mudder-puckin Wooden Decoy!

WANG- Check. Wow Sir! We sure can get a lot into these used sea vans. Where did you get them?

KIM- I got a good deal on the internet through the U.S. Naval Air Warfare Center in China Lake. Better than Eblay! Let's see....Where was I....2000 kilos of Kim's Mellow Yellow Cake...

(hat tip to Deltabravo for the heads-up ;) Ruv You Looong Time!!!
Posted by JihadGene at 10:10 AM

Oh jeez, Great Reader....now I can't see my work through the tears of hysteria. Tickle Me Maverick, bwahahahah....

You just made my Friday perfect and it is only 11am. Me ruv you looong time.

Ruv you 2! Be sure to scroll down for "It's Friday Let's Dance" music bideo!

BTW - I'm here! *waving* Are you at double digits yet?

Tammi- Not yet. Keep it up!