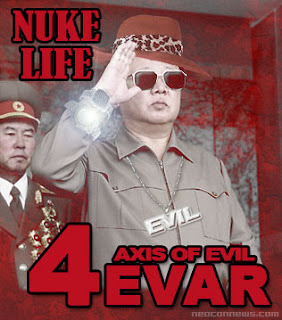 Meanwhile somewhere far west of the midnight sun, along the 38th Parallel, in "The Land of the Morning Missile Launch" we find Great Democrat Supporter KIM Jong IL appalled at the latest news from the John McCain camp...

KIM- (crying) Why, why, why??? ....sob...sniff...sniff... All this times I'm put my hearts and Seoul into the US Democrap party and what do I get for my twoubles?! HEARTACHE! Nothing butts HEARTACHE! General Wang! Get over here and see the latest news on Wirl Why Webb!

WANG- Yes, your Greatness! What seems to be the problem, Sir?

WANG- Wow! Look's like McCain picked a doosey of a running mate for the Republican V.P. spot! The Governor of Alaska! Sarah Palin.

KIM- (drying eyes) What is this "DOOSEY" you speak of, General Wang?

KIM- (blows nose) HONK! ...Do yous mean that sarcastically...as in Barack Whose-Named Obama picked a "REAL FREEKIN WINNER" when he picked that piece of crap Joe Biden to be his runnings mate?

WANG- Oh no Sir. I mean it with utmost respect! Like whenever I speak of you, oh Great One.

WANG- Did you see how Gov. Palin has 5 children? Wow! Her oldest is going to Iraq soon with the US Army. She fishes and even hunts. Says here she is Pro-life. Her youngest, born this past April, was diagnosed with downs syndrome and though she was in her 40's, gave birth anyway. She could have had that baby's life aborted but wouldn't do it. That's some lady there, Great Reader!

KIM- She fishes "and" hunts?

KIM- Five kids. One in US Army. Pro life?

KIM- Enough! Help me take down posters of HOPE and CHANGE. It's over.

WANG- But Sir...it's not over till the fat lady sings!

KIM- Enough about Janet Reno and Madame Albright! Take down their photos as well!
But leave the nudes up.

KIM- Naww. Let that gay bastard, Mahmoud, find out for his own self.

WANG- Anything else, Your Greatness?

KIM- Reprogram all wockets. Make sure they are nowhere near pointing towards Alaska.
I don't want my moose cooked too.

WANG- Very good Sir.
Posted by JihadGene at 8:15 AM

Gawd, you crack my ass.

Yep, I have learned to keep all liquids away from my computer when I come over here to read.