Cursing and Conversing with Uncle Bob or The New Car 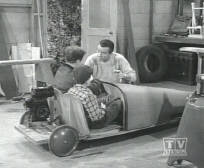 DAD- Good to see your dumb ass too, Bob.

**That's the way it was for them. It was always that way. My Dad reminded Uncle Bob that not 2 months ago he had traded in his Chevy Corvair-Monza-Spider and bought a new car, but Bob didn't tell us what it was.

DAD- Well Bob, you already forget you drove a Chevy? That damned Chevy Corvair of yours, in which you almost took us on a once-in-a *G*damn lifetime scenic tour, off a damned cliff, and into the by-God depths of Lake Berry-fu*kin-essa?!

UNCLE BOB- I was just showing you all how well it *G* damned cornered, that's all! That snaking sum-bitch-of-a-road into Lake Berryessa proved it! And all the while towing a damned 16 foot boat and trailer, mind you! And that car weren't just some dumassed Chevy, either!
It was a Chevy Corvair-Monza-Spider! It was a "sportscar"! Highly respected at Laguna Seca Raceway, I'll have you fu*king know!

UNCLE BOB- Enough of your shit! Look what I got!
(Uncle Bob slowly opens the garage door)

(To be continued)
Posted by JihadGene at 9:42 AM

LOL - your Uncle Bob stories are excellent. I think they should be internet fables or something.

Thank you for the prayers in your sidebar - that's so sweet of you.

Were your dad and Uncle Bob sailors...? (Well, even with the Evinrude motor....)

Lawsy, I can't wait to hear how Uncle Bob spent his money. Do tell!