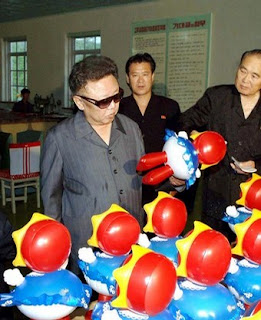 DATELINE NORF KOREA- The DPRK's Great Reader KIM Jong IL has destroyed a cooling tower at Fake Vomit & "Bro-up Doll" Factory #227, in Yongbyon, NORKO. Great Reader KIM Jong IL declared to all the world- "If this scares you...I'm will knock it down in the name of world peace and for 5 million dolla's (US) fast cash"! So with only one mighty Karate Chop (left-handed even) our own beruvved 100th Degree Brack-Belted KIM Jong IL completely destroyed the cooling tower. Yongbyon was once known as the Baby Milk Factory Capital of Communism but has changed with the times. So... the United States' own Georgie DoubleWoo Bushie has now FRIP-FROPPED like a John Kerry waffle, and decided to remove North Korea from its official list of terrorist sponsors!
NORF KOREA NO MORE AXIS OF EVIL?! WTF???
The US Stank Department has since sent in, none-other than the lowly, CondoWeezah Rice, the dubious stunt-double of Michelle Obama, to mad-cow-suking Souf Korea! Why do this? This is an insult to the mal-nourished patriots of the people's of Norf Korea who want only to unify the Korean Peninsula under the Readership of KIM Jong IL!!! While it is true that Great Reader declared we had slightly more plutonium than previously admitted, it was clearly the fault of a temporary employee who comitted suicide by firing squad and is currently unavailable for comment! NORKO DID NO WONG!!! Honest mistake, happen all time on DMZ, and in American politics! ...I'm smoked but I'm never inhaled...She was just deliverin' pizza... or I'm never had sexy time with that woman... or that one, or that one, or...yeah, there in the back, that one.
That is all. JG
Posted by JihadGene at 9:01 AM

According to reports from Wan Hung Lo, Chinese attache...

Happy fourth to you to man, and a fifth under the seat...