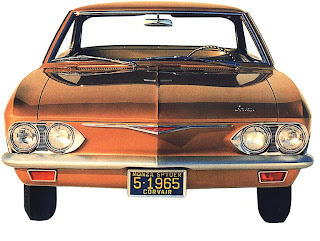 Hello readers! Please go read Fishing With Uncle Bob Parts I & II before you read this post for the full bodied flavor of my mostly-true story.
So there we were at the Suisun Slough City Boat Ramp and my usually unflappable, yet drunken Uncle Bob, was gettin' a bit distracted by some girls in bikinis. Actually my Dad, my brother Joe-Bob (13), and even me, at the ripe old age of 11 in 1966, were all found to be admiring California's swim-wear fashions. Seems when you're pretty-much-soused, and oooogaling/eye-balling bikini clad girls, you tend to forget things. Kinda important things... like when backing up a 1965 or '66 ChevyMonza Spider (Corvair really) to launch a 16' light blue over white fiberglass boat with the mighty Evinrude 60HP outboard engine...it was kinda important to be LOOKING where the hell you're GOING when backing the boat into the water. After Uncle Bob had jack-knifed that boat, driving the piece of crap Chevy-Corvair-Monza- Spider, about....oh.... 17 times... we were gathering quite an audience near the dock. Finally, my Uncle Bob was focused! Like an old work-horse, who new where the barn was, Uncle Bob threw her back into reverse and floored it!!! Now, I don't know much about 1965 or '66 Chevy- Monza-Corvair-Spider's but if I were to do a Car and Driver report on one, it would read like this:
"While road-testing the Spider it was a real "PIG" in all four gears going forward on even an even graded roadway! However, once in "REVERSE and FLOORED" (witnessed by a large audience) on about a 45 degree downslope of a boat-ramp from Hell, the 1965 or '66 Chevy- Corvair-Monza-Spider (with a 16' boat and trailer hooked onto it's ass-end) was as quick as any Greyhound who'd just had it's ass splattered with turpentine!!!"

Again Uncle Bob, now focused and hell-bent for a successful boat-launch at all costs, almost jack-knifed the boat at a speed (in reverse, mind you) of approximately 65-70MPH! We Few....We Panicked Few... (who were in the boat) HUNG ON FOR DEAR-LIFE! My Dad almost swallowed a 12oz Miller High Life, I totally shit, and my brother Joe (who was holdin' on white-knuckled) just smiled that nervous smile of his. At the last possible second Uncle Bob slammed on the brakes, probably the parking brake too, and we, and the 16' light blue over white fiberglass boat with the mighty 60HP Evinrude Outboard Motor, slid off the side (no, not rear) of the boat trailer, and plopped neatly into the waters of Suisun Slough. Right.Side.Up.!!!! On the shore they cheered madly! Hell, Uncle Bob exited the Monza, took off his kind'a Frank Sinatra looking straw hat, and took a bow! The crowd went wild and cheered even louder!!! My Dad was now laughing and grabbing for another beer. I didn't look at my brother Joe-Bob. I knew he was smiling.I was sooo screwed. (To Be Continued)...

*Remember our Men in Uniform this Father's Day! JG
Posted by JihadGene at 8:36 AM

They say the angels watch out for drunks and children and fools. I think they were busy there that day in the slough.

Gene,
I had forgotten those Uncle Bob days, and I've never heard a complete version of this trip. Mother's hearing was always too good, and you guys didn't dare tell what happened while she was within range.
Love you,
Carol

P.S.
I'll have Bill read this when he can tear himself out of his recliner. He's happily spending Father's Day watching golf and later basketball.

"They say the angels watch out for drunks and children and fools. I think they were busy there that day in the slough".

Elder Sister Carol- Try as I might...
those "Uncle Bob days" will never go away! I'm kinda glad that they don't!!! I'm gonna watch some more of the US Open....the Mrs. is grillin' some steaks & sweet-white corn! WooooHoooooo! It's a beautiful day in the neighborhood!

Gene,
I'm glad you're having a wonderful Father's Day.
We're going to torch some rib eye steaks between the open and basketball. I wish we were together today.
On Daddy's inspiring the writing --
Joe wrote, Susie can write, and then there's you and me. I used to write such long letters to Cousin Barbara that Daddy would complain because the letters always required extra postage.
But I do think Daddy's letter writing had an inflluence. And he, like you, always kept in touch with his military service buddies. He usually wrote to them around Christmas.
The only time I ever heard Dad sing was at some kind of veteran reunion. It also was the only time I remember seeing him drunk. (Mother was irate, but, then, we saw that a lot.)

Excellent story! I can't wait to find out what happens next.

"They say the angels watch out for drunks and children and fools. I think they were busy there that day in the slough".

How the hell you think I lived so long... ;) I got all three bases covered.

Stay tuned Joated, it only gets more fugly.
JG

'Neck- You keep those bases covered and your pants on!!! Speakin of pants on! Stay tuned for some of that action in a later post of "Fishing With Uncle Bob".

Actually, it's a black one with some "red highlights"...

Neck-
Because I drive a red dodge truck and I'm scared you may be my evil or less evil twin brother. They drink, they fish, they drive the same truck, they occasionally go to a Baptist Church (Easter & Christmas) and both have twisted senses of humor! Scary huh?