Fishing With Uncle Bob Part I by jihadgene 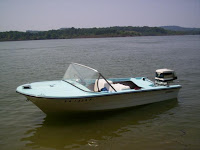 Twas the early summer of 1966 when I was really getting into catching fish and my Uncle BOB (the happiest guy to ever drink beer and drive) invited us to go fishing with him. I was soooo excited! He had a boat and everything! My Dad, who was a US Marine at Guadalcanal and later at Tarawa during WWII, probably had his doubts, but figured that me and my brother, needed to learn survival skills. Yes, it was 1966 and Uncle Bob was takin' me (at age 11), my brother Joe Bob (at age 13) , and my Dad (younger than Bob) out fishing on his beautiful new 16', light blue over/white colored, fiberglass boat, with a (then ) powerful 60 Horse Power out-board Evinrude motor!!! There was only one slight draw-back....Uncle Bob was a DRUNK! But in all honesty, he was a FUN drunk!
Well, we left the city limits of Fairfield, Ca and headed to beautiful LAKE BERRYESSA in yet another draw back... a Chevy Monza Spider. A Chevy Monza Spider is just a couple of fancy words for a stinking Chevy Corvair, with about 15 more horse power, and a stick shift with a white knob. The Spider was black with a red interior. Shit, I'll never forget it! Now, I got nothin' against Corvair's understand, but anyone who pulls a 16 foot boat with a trailer using a damn little Corvair on the twisting and snakey road to LAKE BERRYESSA, while sober (let alone DRUNK), has a deep-seeded "Death Wish"! It seems Uncle Bob, was already "primed" for the trip, judging by his loud and boisterous behavior. So we got about 20 miles outta town when Uncle Bob pulls over for a much needed pit- stop. It seems Bob, a veteran drinker and driver, packed his customary empty "Hills Brothers" 5lb coffee can between me and my brother in the back seat of the Monza Spider, which was equipped with the cool 4-speed-stick-shift and white colored knob. My Dad, who is a non-drinker, began drinking at this point. Being young and dumb, I thought nothing of it. YeeHaw! We're going fishin'! My brother only smiled nervously. Uncle Bob opened the driver's door, took the coffee can and simultaneously waved at passers-by while takin' a piss. He was happy! I laughed. Dad drank more and my brother slouched down low in the small seat of that classic Monza SPIDER, smiling. Well, we got there! We fished and fished!Uncle Bob fired up the Evinrude to a "good fishin' speed" of 35 or 40 MPH, for all of, I guess it was maybe 20 entire minutes! Oh well, Uncle Bob was running low on "sodies", as he called them, so it was time to go. Time to go and get more beer, that is. No need to pull anchor, as we had dragged it across the lake bottom the entire time anyways. My Father (the non-drinker) just drank more beer. My brother smiled nervously. The look on my Dad's face told me he needed many more (beers) to get through this "family reunion" of a fishing trip. So somehow, Uncle Bob gets the boat onto the trailer, without incident. My Dad burps, and smiles. Bob pisses, farts, and laughs. My brother looks nervous and smiles. We load up in the MONZA. My Dad pulls out some Pepto Bismol and Uncle Bob, then seeing that my father had-had enough, proudly and loudly announced that we were not mere fishers of fresh-water fish, but rather, fishers of Sturgeon in the brackish waters of Suisun Slough! Suisun Slough is a place... that though I had never been there before (and I will never go back)...must look exactly like the Delta region of South Vietnam (reeds and all) . It's shore is an oozing, gooey, blackish, kinda muck. It looks nasty, like some kinda sewage, and your feet will sink a minimum of two feet into it.
But back to leaving LAKE BERRYESSA. Remember how I told you the road had all these twists and turns? Well, just try it while a drunk is at the wheel, driving way-too-fast downhill, in a little Monza Spider with a boat and trailer towed behind it. One moment the left rear tire and boat were hanging off the hardtop, the next it was the right side catching nothing but air!. The tires were screeching! It sounded like fingernails scratching the blackboard! It was then I became very familiar with the term "being scared shitless". I don't know how he did it but my Uncle Bob could manage to keep at least one tire hanging off the edge of the cliff at all times, while laughing, drinking beer, and joking with my Dad. Since my Mom was a Jehovah's Witness, I was praying to The Jehovah God, his-self! I swore I wouldn't make fun of my little sister anymore and that I really didn't mean to call my Elder Sister (Carol) a JACKASS. I swore I'd go door to door 7 days a gawd-damn week, spreadin' the "Gospel of Jehovah", if He would just get me outta this fishing trip in Hell! Since my Dad was a Baptist and it looked like we'd fall off into the lake, I told all the God's who would listen, that I didn't need another baptism. In this case at the bottom of LAKE BERRYESSA. I looked at my brother, he smiled nervously. Apparently the God's listened. Next stop was a gas station that sold beer, bait, and booze. Next stop, Suisun Slough! (to be continued)
Posted by JihadGene at 8:34 PM

Oh my freakin' goodness! That is the best family story ever!

Small question... does your brother always wear that nervous smile on his face?

(I lost it totally at the part about the anchor being dragged across the bottom of the lake. Priceless!)

I've had a few adventures in small boats on big waters (who hasn't?) but not quite like this.

DB- Yep. My brother always had that smile. He was the "bright one"...for sure! He's been in Heaven for a looong time now and I know he's up there on some cloud wearing that signature smile of his! I always worked the funny angles in life for survival. I damn sure had to around my Mom & her "brain-washed" Jehovah's Witness friends. My Elder Sister Carol and her husband Bill made life fun for us kids. Everyone should have a sister like my Carol....BUT DON'T EVER CALL HER A JACKASS!!!
Ruv You Looong Time!!!
Gene

Joated- I (and Uncle Bob) will not disappoint you! The true story of "fishin with Uncle Bob" continues on Sunday! Stay tuned.JG

Dude, I'm a a Baptist, a Drunk, and a fisherman. You comin' after me? I don't have a "spider", I have a truck. I keep all wheels on the pavement, unless I park in the dirt.