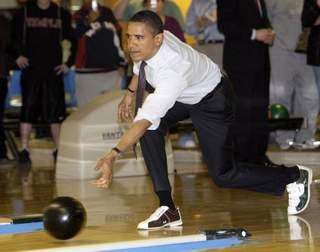 Democrat Presidential "HOPE"ful,
BARRACK "Whose-Named" OBAMA has teamed up with wife, Maytag Obama, in the all-American sport of bowling! The OBAMA's are raising cash, both from and for, "Many Ignorant Americans". OPERATION M.I.A. (the brain child of Chicago's own Reverend Wright) is proving time and time again that, "There's a suck'a born every minute". Barry O. stated that his wife (Magnavox Obama) was sick and tired of all the IGNORANT AMERICANS (mostly whites, hispanics & asians) running around with cash-money in their pockets, going to StarBucks (and such), paying their mortgages on time, saving up money, and all the while not one cent has gone to help him to "CHANGE" AMERICA . Upon B.O.'s rolling out the first ball, the Reverend Jerrymyass Wright said, " See that! GAWD DAMN the gutter-ball! This is so symbolic of what GAWD IS DAMNING AMERICA for! Ya see a black man, who's on the ball, then roll the ball, then some rich white mens who's owns the bowl'n alley (balls 'n all) sees to it that the black mans balls are stuck down in the gutter!!! GAWD DAMN all the racist-assed bowl'n alley owners anyways!" At this point Senator OBAMA escorted the Rev away saying something about his crazy old "Uncle"and stating "Man, I can't wait to see those "TEAM REZKO" bowling shirts we have back-ordered". As their bowling date came to an end, B.O.'s wife (Michelin Obama) said....
"For the 2nd time in my adult life, I'M PROUD TO BE AN AMERICAN"!

(Thanks to the Parkway Rest Stop for the inspiration! Yeah, Baby!)
Posted by JihadGene at 8:39 PM

There's more truth than fact in this, unfortunately.

Who the hell bowls in a NECKTIE??? Damn! Couldn't he have loosened it at least? I hope the dork lost the blue-collar vote for good. He can no longer pretend he is "one of them." Hanging out with middle America isn't up his alley. What a pin-head.

Mommynator- I was afraid of that.

Deltabravo- I would say something witty but I can't spare the time. Gotta split.