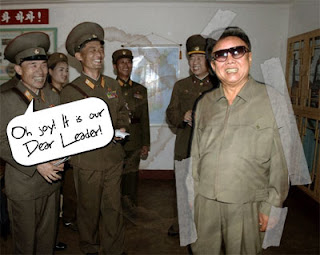 Meanwhile...somewhere north of the 38th Parallel we find Great Reader, KIM Jong IL in the DPRK's very own SillyCone Valley on an inspection tour of his newest internet inspired brainstorm, called "Gluegull".

WANG- Sir, the Americans have something that sounds just like this, it's called
"Google".

WANG- As you say, Great One...but what does Gluegull do?

KIM- It's an Americran Engrish code breaker!!! It's a slooper-dooper slurch engine!
It's very John Tesh!!!

KIM- Here, now using this computer, we are on Homie's page of Gluegull! Got that?

WANG- Sir! Now it came up with a reference to... "Kimmipedia"?

KIM- Now what that tell you?

WANG- It says... "Blue Dog Democrats such as Congressman Jim Costa
vote the way Madame Imperial Speaker of the House, Nancy, tells them to.
They are known as 'Pelosi's Poodles'!!!"

KIM- Toad you! Now for some real laughs, type in "Al Sharpton" and "immigration".

The beta version of Gluegull has a "look into the future" function. If you type in "Jim Costa" it says "As of November, Mr. Costa is unemployed."

What's worse, she probably shaves them.

ROFTL! On target, and fired for effect.

Hilarious oh Great one. We need to get rid of pelosi and her pound.