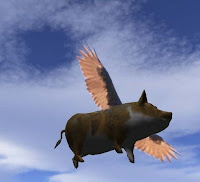 This UFO was spotted near the Calexico-Mexicali area of northern Mexico at sunset today, approx 1958 hrs (PST). The UFO was last seen headed in a northwest direction towards Fresno, California which is a known hide-out of the infamous That 1 Guy. Homeland Security's own Janet Napolitano was unavailable for comment as she was busy trying to suck up to the VFW and American Legion, the stooopid bitch! The White House did, however, issue this unauthorized statement from Vice President Joe Biden...
"F#ck wearing a mask! If this sucker flies over you and you got no overhead cover, you'd best be donning a pith helmet and some wrap around shades at a minimum! Maybe a fireman's helmet, if ya can get your hands on one. That mask ain't gonna save anybody's ass, if you're asking me! Whatever you do, don't look up! Also I would suggest that all citizens (legal and undocumented) carry a sturdy-ass'd picnic umbrella! Oh...and for God's sakes, whatever ya do, don't even f#cking fly! Could you imagine flying low-and-slow in Air Force 1, over New York City, and end up hitting' a flock 'O them bastards at 3,000 feet! Then having them gettin' sucked-up in the jet turbines of that 747 and the F-16 jet fighter escort?! Holy carnitas, Batman! You'd be scaring the hell out of everyone! But... in the end...I guess you'd be making a bunch of Puerto Ricans very happy."
Happy weekend!

Posted by JihadGene at 9:52 PM

I saw it, it went right over my house. Still wondering why it chose my roof to crap on.

My sister in law said one of those landed in her back yard last week and her Rottweilers killed and ate it.

That sounds like a direct quote from Joe. Isn't he just a laugh riot?!

Leeann- You must be south of the DMZ (Fresno)! (I blog rolled ya!)

Buff- I hope you have some pics of 'em on your blog. If nothing else, I love your blog for the pictures of some wonderful food alone!

Pam- Why doesn't the MSM show stories on how those Rottweilers saved the day and not about having chewed on some mailman?

Elm- I was in the "JOE-LIGHT ZONE" when I wrote this. I can't wait to see your next blog post in... The Twilight Zone!

I saw that one... at a Pink Floyd concert in the Shoe... awesome. He didn't even shit, much less fart on the fly by...