KIM Jong IL has Your Number 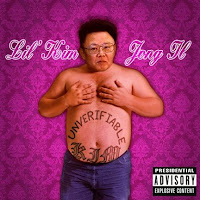 WANG- Sir, we don't have a button here for that sort of thing. You have to call it in on your cell phone to activate detonation.

KIM- Wang, what is number to bro up the bomb?

WANG- I wouldn't have it, Sir. Only you have it.

KIM- Oh...right. What was that number? I seem to rememblurr the number was in a song...like...Ten Little Indians...naw...I'm Rooking Over a Four Reef Clover...nutz! Give me some songs with numba's in them, Wang.

WANG- Fifty Ways to Leave Your Lover? One is the Loneliest Number? 100 Bottles of Beer on the Wall? 96 Tears? Mambo Number Five?

Welcome to Britain's got Talent!
To vote for Susan Boyle....press ONE now....
(Kim presses one)

WANG- Success, Sir! Our seismographs are reading an earthquake of 4.7!

Hello friend... and welcome to the "Shake Hands with Obama and Friends" hotline!

To shake hands with Barack Obama, press ONE...

To shake hands with Susan Rice (US Ambassador to the UN), press THREE...

KIM- Get wockets weddy for launch!

WANG- Right away, Most Balistic One!

WANG- Of course, Your Greatness.
Posted by JihadGene at 8:41 AM

OMG I am SO happy I put down my soda upon opening your site. That picture would of caused diet soda to go all over the place.
Holy cow is that funny!

I love you same same tho furst time weaving comment.

I'm a day late but you were on my mind over the weekend and I am forever grateful for your service to Our Country.

Carry on! See you over at the B5.
-alexa kim

Kimmy could have saved himself a lot of time if he'd have just called and asked Joe Biden !

She has picked some excellent material for her first two tunes. I wonder what numba three will be..

Maybe the theme from Team America: World Police ? Probably not.

Maeve- I'm happy you put down that soda in time!

A. Kim- You numb'a WUN! Thanks looong time for visiting Great Reader!

Hahah! Only Jong wouldn't have a big red button.

Hammer- Maybe Hillery will give him one.

Cappy- Fire that muth'a up!

A North Korean missile.... That guy couldn't hit a cow in the ass with a banjo if it was standing still...

BDick- I hope you're right.

Where do you come up with this stuff??? LMAO...

H2O- I guess it comes from my parents being Texan or my being raised in California surrounded by Koreans ;).