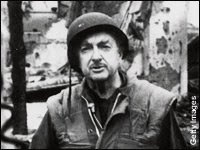 According to one of my favorite blogs, The Jawa Report, a homegrown terror cell got busted. Read all about it HERE. So let's hear what some people in the news have to say about this...

Janet Napolitano- If only Obama could have only shaken hands with them in time. Sad. But on the other hand, they could be a group of taxpaying white conservative christian NRA military veterans!

Somali Pirate- Lucky bastards! They didn't have to deal with Navy SEALS like we did.

Sarah Palin- Give 'em to me. Alaskans know what to do.

Sean Hannity- I told you Reverend Jeremiah Wright is a mutha-f@#k'er!

John Edwards- You're not with the National Enquirer are you?

Big Bird- Why the hell you askin' me, asshole?

Nancy Pelosi- Those liars in the CIA will try and take credit for this bust, but the true credit belongs to ME, and I did it all without water-boarding!

Simon (American Idol)- My opinion...overall? A very underwhelming performance by a bunch of foolish young Negro's.

John Kerry- I can't quite put my finger on it... but I'd say that those young African Americans were swift-boated by George W. Bush.

Posted by JihadGene at 8:01 AM

Labels: in the news

I bet you anything these guys were are on ACORN's payroll last November.

Sounds about right for all concerned. ROFLMAO.

Joe Biden: Well, that was part of a secret operation where we, you know, just went right in there and had a plant, an informant kind of guy... and well, you know how that goes. He pretended to be one of them for a year and fed our guys at 555-555-1212 all the information and they listened in on the secret tapes from their room at the XYZ Arms Apartments in Schenectady and we used our contacts in the military to funnel some playdoh kind of C-4 explosives to them and... mmph! Hey! What-- guys, let me go! What do you need duct tape for-- Gosh shake....mmmph, mmmmph-btmp. Mmmpht.

If only Obama could have only shaken hands with them in time.LOL! It's all gold, but that just struck a chord! ;)

Mad Nancy's one was great. I hate that bitch.

Happy Friday Gene, sorry I haven't been around. And thanks for the mother's day card, it was awesome!

Enjoy your Memorial Weekend. God bless and remember them all.