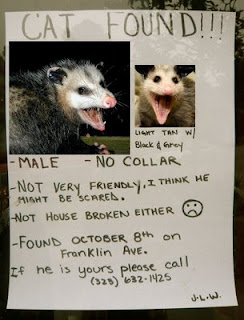 Anybody lose a cat? My Elder Sister Carol found him awhile back. My brother-in-law is not too cat crazy and he does have priors for felony woodpecker head-smashing with a deadly weapon (Craftsman framing hammer) back around when Johnny Cash was touring San Quentin and Folsom Prisons. To keep my sister's hubby outta jail I'm putting out this APB (All Points Bulletin) before he goes back to Sears or the Home Depot and picks up a Sawzall. I'm not sure about the conditions of my brother-in-law's parole but he could be violated and returned to prison. Or does one get violated in prison? Whatever... I'm no lawyer, just a good brother-in-law. Even if the cat ain't yours you can have him. The way this cat behaves, I think it must belong to Maeve but I'm not sure, so don't say nothin' to her, lest she give me the "hairy eyeball" treatment. Don't say nothing to my brother-in-law either. Oh yeah! They named the cat Gray Stray but he won't respond for beans. Can cats get the swine flu or just brother-in-laws?
(*cat pic stolen from Hammer)
Posted by JihadGene at 9:39 PM

ROFL! That's hilarious! And yeah, your brother in law could be violated. ;-)

We actually for a brief time had a cat like that. The hub went to the rag box in the garage and was just about ready to reach in when he heard a hissing sound.
Animal was called instantly.
I hope they found the owners to that kitty.

I know that cat !

Oh, they found Fluffy!!! How exciting.
Rabies shots will be an adventure too for the folks who are advertising.

The best cat name our daughter came up with was when she was in college. She had a cat named, "Hazard." And it was.

Oops, that was supposed to say "animal control".
Damn, and I was sober writing that first comment too.....

Damn people finding cats on my birthday. I already have 3.