Slanted Eyes or Oh No! Rice Again for Dinner! 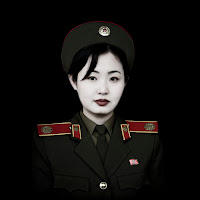 Remember how the Spanish Olympic basketball team caught hell recently for the 'racist' photo of them using their hands to make the slanted eye look? I still think it's not that big of a deal but then again it was many years ago when my wife taught me a little lesson, one I will never forget.
I was working as a Police Officer in a small California town when a Deputy Sheriff told me a joke, and yes, he knew I had a Korean wife. The joke went as follows...
***

DEPUTY- Why do Koreans have slanted eyes?

ME- I don't know. Let's get this stupid joke over with. It's not the dirty one is it?

DEPUTY- Naww, It's a clean joke. Here's why Koreans have slanted eyes...

(The Deputy then put both hands up to his temples making the slanty-eye look and said...)

So at the end of my shift I go home armed with all my police gear and this joke. Here's how it went with the Wife...

ME- Hey honey! Do you know why Koreans have slanted eyes?

(At this point our cozy home became a funeral parlor. It was deathly quiet. Bone-chilling cold.)

WIFE- (She says nothing for 10 long seconds. She just looks at me...then speaks lowly, slowly)

Okay Dear, why do Koreans have slanted eyes?

*Yeah at this point I could have bailed out. Hell, I should have bailed out...but being the JihadGene that I am, I proceeded to tell this joke. A joke in these circumstances that would make even the drunkest drunk think twice before telling it. I realized I should never have begun telling her this joke as I simultaneously wondered why the house was so cold. Oh well, what the hell...I go for it!

ME- ( I slap my hands to my temples. Pull back the eyes to their utmost in slanty-ness and utter the regretful words...)

WIFE- (Looks blankly at me. Says nothing for a full 10 seconds. Then says...)

Do you know why Americans have the round eye?

I don't know honey. Why do Americans have the round eye?


Well fans, she made me dinner that night. Handed me the plate and said, Oh no! Hambooger again for dinner! I thanked her and ate it. Hambooger (hamburger) again for dinner. I go back to work at the P.D. (police department) and they ask me, Hey Gene! What'd ya have for dinner? And they laugh their asses off. Seems my wife told one of the police dispatchers and now everyone was in on it. Aww Jeeez. This went on for 2 weeks. Sooner or later I figured the grocers in the Tri-State area would surely run out of beef. Two whole weeks of pooping out brown ground-round. I learned my lesson and I never, not ever, again made fun of my wife's lovely eyes. Now when we have hamburgers she just smiles her all-knowing smile as she hands me the plate. I laugh and give her a kiss. Our son asks, What's so funny? I say nothing. The wife nods and smiles. Marriage. Together you make it what it is. Like Kenny Rogers says in that song The Gambler...You got to know when to hold 'em, know when to fold 'em, Know when to walk away and know when to STFU.
Posted by JihadGene at 8:02 AM

Haha! Your wife has a great sense of humor.

Bwahahaha! I think your Uncle would have enjoyed your lack of impulse control on that one, Gene! Is it hereditary?

And I think I like your wife even more than I like you now! That's a fantastic little story! Good for her!

You are married to one cool lady. How'd you manage that?

Geez, at least you had the good taste not to make fun of Kimchi.

Hi Gene. Here's a joke you can tell your wife to make up for it... It was told to me by a lovely femme fatale.

So they have someplace to put their feet.