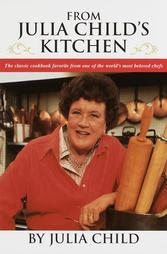 KIM- Not so much what's wong, more like look at what's most AWESOME!

WANG- What a hero she truly was!

KIM- Yeah, just checking. Obama is nothing compared to the greatness of Bwittneey and Pairs-is.

WANG- Yes, Great Reader. Now about Julia Child, she and people like her, were the unsung heros of...

KIM- Then how can Julia Child be more bigger than a Blittney Spears?

WANG- She was a heroine, Sir.

KIM- You mean Julia Child was on drugs?! No wonders she tawked so weird ! Her goose was cooked, alright.

WANG- No Sir! She was no drug addict! I simply meant she was a woman of distinguished courage or ability, you know, admired for her brave deeds and noble qualities. She worked for an American agency that spy'd during WWII.

KIM- Wow! I bet she saut'ed many a Jap on Iwo Jima!

WANG- I think you've had enough coffee for today, Most Caffinated One.

KIM- Did John Kerry fight for the Germans or the Japs?

WANG- Step away from the coffee and put the rubber chicken down.

I thought she was so awesome, and used to do a way kickass impersonation of her.

There she was all along, hiding in plain sight. (*Raising a wooden spoon in salute to a true heroine.)

What a cool lady she was! Our WWII generation is moving on and I miss them mightily.
(*Raising my Star Spangled Spatula in salute to one who cooked many a goose and I hope German goose-stepper's too. Loved her looong time!)

And you? I think I'm officially scared to death. I actually FOLLOWED that whole post......I may have to cut back to 2 cups of coffee a day. ;-)