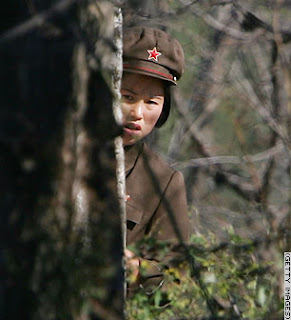 Meanwhile it's another lazy Wednesday in The Land 'O the Morning Missile Launch,
Norf Korea, and we find Great Reader KIM Jong IL, back on the AL-GO invented, in-toe-net and World-Why-Webb ....

KIM- Much betta! Now backs to bidness. Accordian to this article, food holds the power of negotiations and prossible friendship.

WANG- Friendship with the DPRK, Great War-Headed One?

KIM- Let's me defline friendship for you, Wang. Friendship (in the DPRK) is the stopping of pointing of wockets at others, the stoppage of makings of nuke wockets, and the stoppage of helping MOOSE-LIMBS (in the GAY BARS OF SYRIA and IRAN) acquire "said" wockets.

WANG- Why would we do that, Great Reader?

WANG- Make mine an In-'n-Out Burger!
Posted by JihadGene at 8:21 AM

Might be a new set of teeth in there for ya too, Kim-chee! (Should you ever need them, of course....)

Could hardening your enemies' arteries be classified as bio-warfare?

Jersey and North Korea...perfect together.