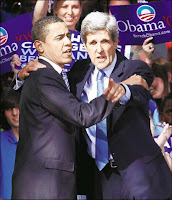 KIM- Get Blic pen and paper for taking of dictation from Dicktator!

WANG- Got it and ready, Sir!

You gettin' all this, Wang?

WANG- I'm right with you, Sir!

KIM- Good. Where was I....oh yeah... Deer sheep pornicating peoples of Iran...I'm KIM Jong IL...and I'm am sending you this O'fishwall Norf Korean letter so's you will not be empressed by the Great El Diablo, President Baalack Whose-Named Obama! He and his claim to have any and all connections with "you people" as a MooseLimb (Muslim), is all a bunch of DONG! Lend an ear and listen to the Great Reader's story...

I'm was born a poor black child.
(Wang fights back laughter as KIM gives Wang "the look") (Kim continues)
I'm was a little Jakarta street kid...NO! Make that a BIG PyongYang street thug....and I got into twubble more than one thousand times for making feces...NO!... Make that, making faces... during my Norf Korean-Koran study classes, at the KIM IL SUNG Wocket Scientist School and Mosque for Radicalized Losers. For mine actions I'm was water-boarded for more than 2 days. I'm holds mine breath for over 49 hours just to show those infidels who they were dealing with! Later I'm went out and golfed 11 hoe's in one! I'm one bad ass moe-foe, I am! Where was I? Oh yeah....later I'm was taken to a gulag where dogs was barking at me! There, I'm was force-fled Jimmy Dean's pure pork sausages while blindfolded! Later, during Ladies Night, I was featured in a nudie gulag porno pic! It's hell being a Mooselimb, I tell ya.
But on the bwight side...one of the prettiest sounds I'm ever heard on this here Planet Earf, was mine Father calling us to pwayer (prayer) , in Arabrick, at sunset...

WANG- Can you elaborate further, your Imamness?

KIM- Certainwee! At suns-set it would begin with the sound of an air-raid siren and my Daddy, KIM IL SUNG, would alert us with his battle cry!

WANG- Excuse me, Most Holy One. Battle cry, Sir?

KIM- Yes. Once the air-raid sirens sounded (wooden spoons on pots and pans) my Dad would yell his infamous battle cry of "HOLY SHIT"!!! Then... the air-raiding of villages, and the killing of civilians would begin! The young American soldiers would soon arrive and then be going into the homes of Norf Korean Mooselimbs in the dead of night... terrorizing children...and women like John Kerry...breaking historical and religious customs! Praise be to AhWah!!!

You getting all of this, General Wang?

(Hat-tip looong time to Pam for this piece)

Posted by JihadGene at 7:22 AM

but seriously: I saw a documentry some months ago on North Korea and the way the people perceived their leader... amongst other things they were doing mass-eye-operations on them... oh boy... it's really like in any country with dictatorship; the people are just completely broken down, both mentally and spiritually! And even afterwards... years after they have been freed... they never really recover, still stray slaves to a dead dictator and to their own signs of being so blind and afraid and going along with it... doesn't matter which country you talk about, it's always the same story!!!

Oh, my dog! I'm was born a poor black child.

BWAAAHHAAAAAHAAAA! The entire thing's hilarious, but some bits just had me rolling...!!

Sarah Sofia- I know. I was on the DMZ for a year and two other years down south in Pusan. My thing is humor. I well know the truth about N. Korea. I am an American with a weird sense of humor, that's all. It is better to laugh than cry. I have no love for KIM Jong IL. Hell, I have no love for OBAMA either. Thanks for stopping by and commenting! You are always welcome here,as is your opinion/observations. JG

Thanks for the inspiration Pam!!!

I got that from Steve Martin's movie...The Jerk. A classic.

That was some excellent stuff!

All you need is a a little isparation.

Love the picture of the taxpayers !

PS - If I may leave a caption for your Obama/Kerry Picture.

Kerry: Look! It's that Bitch Sarah Palin!!! We gotta kill her!!

Obama: John!, Dude! Chill Dude! My people are all over it...

USA_Admiral- Just a little dab will do ya!

kid- thought so too!

Silicosis is cause by a special kind of dust in the mines, and this disease affected a large number of workers on the mines, especially when dust control techniques had not been properly developed. companies/equities, buying gold stocks is a good option. Many families love to be involved in helping with a wedding, and will gladly make a donation. Perhaps I'll have to make a honeymoon of it someday, where I can tour the majestic facility and sample some of the finest chocolates, right at their source. Toad The Wet Sprocket