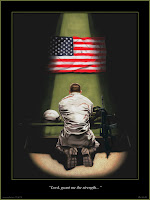 Former US Army Sgt E-5, JihadGene, here with a prayer request for a cancer fightin' soldier named Evan. Evan is a kid who dreams of being a soldier. He was battling the big C (brain cancer) as best he could and later refused to eat. Some fine folks (US Army SOLDIERS) contacted Evan and told him to eat...so he did. Evan is a beautiful kid, who loves to play Army and has dreams of being one of America's best. Evan already is (the best) but the little guy needs support in the form of prayer as he is currently hurting. We at Great Reader are Army Strong and pray Army Strong! Please pray for Evan and read TankerBabe's blog. You can go HERE to leave a prayer. Thanks.
Posted by JihadGene at 12:10 PM

Praying for Evan; may God bless him and his family.

TankerBabe's blog entry with the pictures made me cry, thinking he's so sick now. LOVED the one of the two soldiers in their red berets.

Done and will do.

Prayers on the way!