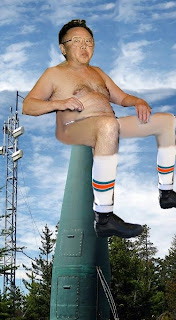 So...the wife and I are out on a morning walk and I (surprise-surprise) am talking about KIM Jong IL. The wife tells me that what she gets from KBS TV (S. Korea) is that the normally oppressed North Korean people won't say much of nothing about anything, but that with this latest ICBM launch they are both very proud and boastful...like..."Did you see what we did"?!!! It's as if North Korea has won the World Cup or that Tiger Woods is really a North Korean. This is not good. Thanks for doing nothing when it comes to national security Mr. President. KIM Jong Il has pwn'd your lame ass! (*Hat tip to Hammer for the great pic of KIM Jong IL getting a colon cleansing... but thanks to PRESIDENT Wearenotatwarwithislam OBAMA, it's the free world taking it deep for the O-Man.)
Posted by JihadGene at 7:05 AM

Obama getting pwnd by everyone on his little European vacation is a gross understatement.

Next up at bat is Hugo Chavez.

Yeah I think we were launching those back in 1958..NK is right on time.

Well, that's what I'd expect them to say on TV of course.

I read a story that he was sobbing about having the put the money into the Tinydong II instead of getting some food for the starving N Koreans.

I think they mistranslated him though. He was sobbing tears of side splitting laughter over shooting one rocket and having the entire world chase it's tail and trip all over itself like the three stooges and hasn't even got an angry letter yet.

Scares the crap outta me. I am about ready to start stockpiling food and ammo...

To bad they didn't convert that fool to the "satellite" they were supposedly launching. I don't think many nations would've minded that too much... I say send him up, just like Dr. Evil.

Ok I love this post.. Made me laugh and is sooo true...