The Truth According to Baghdad Bob 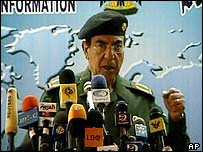 #1- JihadGene is not within 500 miles of the nearest keyboard, so as to twist my words, or my astute observations of the world around me!

#2- Erica is really a bowler! She knows nothing of shooting pool!

#3- Teresa is a homeless blogger who wanders the countryside taking pictures of peoples homes, sheds, and flowers. She begs for money but do not be fooled! She spends it all on wireless internet service providers!!!

#4- Jimbo, of Parkway Rest Stop is hunkered-down in a bunker somewhere in Colorado and owns this alligator farm! He is deathly afraid that Erica will find him and give him a NOOGIE!

#5- RedNeck does not live anywhere near North Carolina! He bloggs from a Iranian bathhouse and male massage parlor in downtown Tehran, looking for Mister Right!

#6- GUYK worked for Kofi Annan as a UN Special Advisor! He got the boot when he ratted-out Kofi's son in the Food for Oil Program. He has been begging UN Secretary General, Ban Ki MOON, for a job but has been repeatedly rejected.

#7- Drunken Wisdom's own That 1 Guy is a shape-shifter! Whatever you do do not put Flat Stanley in your trouser pockets! An infidel "PERV", just like the RedNeck!

#7 and 1/2- That 1 Guy (T1G) really only weighs 143 lbs fully clothed and sopping wet! All his ramblings about being on a diet are bullocks dung!

#8- JihadGene's Elder Sister (Carol) was last seen on a "jazzy scooter" headed southbound on California Highway 99 toward Fresno! JG has been filling sandbags and laying-in enough supplies for a two year siege, ever since. Gene was overheard saying, "If she'd just sober up".

#9- It took Straight White Guy two 1000 round boxes of .22 cal ammo, seven hand grenades, 14 claymore mines, one case of Budweiser, and an M242 Bushmaster 25mm chain-gun, to kill one scrawny squirrel! SWG said (after surveying the ruins of his neighborhood) "OOORah!!! Got that Sum-Bitch"!

#16- Joated does none of the work, shown on his blogg. The US Border Patrol wants to speak with him.

#2- Deltabravo is actually barren. She has no teenage daughters, and is in a cell across the hall from Mommynator. Poor DB.

#10- (Finally) Saddam, Uday, & Qusay are alive and well. They work as fry cooks in Baker, California's "The Mad Greek Restaurant". Fully employed, they are currently drawing unemployment benefits, and are taking on-line college classes, paid for by California's tax-payers (all 1,567 of them), from UC Berkeley. JG
Posted by JihadGene at 8:04 AM

Hey Bob... did you notice that the Americans are now in Iraq???

Teresa- There are exactly zero Americans in Iraq! Our Allies, the Russians, are only pretending to be Americans so as to appease those bastard dogs on the FOX News Network! And next time Teresa... Put on a hajib when you address me!!! Or you will be beheaded, like we did to the entire 82nd Airborne Division! Don't try to tell me the 82nd is in Afghanistan, either. We beheaded them! You have my word on it.

I was watching Charlie Gibson the other night and I said to myself, "Self, I really miss Baghdad Bob. He did this shilling in a much more entertaining fashion."

(Really, every time I try to get into the hospital there, they lock the gate and tell me to go home. Damn!)

Put on a hajib when you address me!!!

Bagdad Bob auditioned for the Backstreet Boys back in the day... Apparently, he didn't make it and took the next best gig.

He is funny though... I'd like to see him and Larry the cable guy in a smack down match... that'd be a good 'un now.

I RUV all of you guys LOOONG time!!!
That's why I did this...well except for that heathen REDNECK, who longs for an ass-beatin and a beer (yes, in that order). jG

Jigene,
The only time I desire to a trip to Fresno is when I'm NOT sober.
So, it's either be with you or be sober.
Elder Sister

Carol-
Like Nancy Reagan said,
"Just say NO"!
Are you drinking the minty-green Scope or the Listerine again? Back in the 60's you loved the cinnamon flavored Lavoris. I would ask you what you were drinking and you would reply, "It's just me and my RC (Royal Crown Cola)!

Eric-
I wouldn't doubt it for a second! Just had to get my clown on.JG

GW8WEEDR, damnit, I'm NOT a heathen, I'm a HELLION. You say that one more time and I'm gonna get my wife to superglue your... pecker to your leg, if she can pry it out of your hand. You get what I'm sayin' don't you.

Oh, and I'd like the beer first before the ass whipin'. That's how it usually works 'round here.