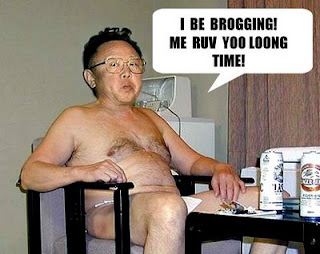 Meanwhile somewhere in Pyongyang, Norf Korea, DPRK, it's 3 AM in the Imperial Palace of Great Reader KIM Jong IL, and we find that his telephone is bling-ing.
KIM- (someone at the bedroom door) Knocka-Knocka-Knocka! ...ZZZZZZZZZzzzzzzzzz...KNOCK-KNOCK!
....Who's dare?!

KIM- And yous wakes me up at 3 AM in the morning for whats, Wang? Yoo have some kinda death wish or some-ting ?

KIM- Damn! Give me phone Wang!

KIM- HELL-ROW MYSTERY CALLER! It's 3 AM and I am Great Reader KIM Jong IL! Who are you and from where are you calling?

KIM- Yes. I'm heard of you, Looong Time! Yoo some kinda Spirit-filled Leader, a WEVEREND with your owns church, nose less. So's how's your Jooo Hatin' Congregation on the Souf Side of Chicago doin? Donations up?

Caller#1- Blah.Blah.Blah. Must be gas prices.

KIM- I hear ya! So's what chew calls for?

KIM- But the Dude's runnin' for President... and you means to tells me he never says the word "RUV" to or about anyone or any thang and can only say the word "REVERE" instead?! Per scripture in the Bible? Where in the Bible is that kinda sick crap?!

KIM- OOoh, that Bible. OKray. But I mean... the guy musta told his wife he "RUV'D" her at some time. I means they have two kids, and all. What kinda wife would...

KIM- You're right. Sayin he ruv'd her would only piss her off even more.
I means what with her daily struggles and all.

KIM- Sure! She's only making around $300k a year, "a typical" Nubian Goddess in the middle-class, whose an Ivy-League-Educated Administrator, who lives on/in a suburban estate, and whose friends are all "typical white" average, middle-income, blue-collar lawyers, just strugglin' day-2-day for some frickin gas money. Yep. Life in America is a real bitch, for her, I'm sure.

KIM- You're right. Enough abrout her.

KIM- Have him wear a USA flag pin on his "Team Rezko" bowling shirt!

KIM- Don't go throwin Granny under the bus again, even if I liked it.

KIM- Oh hells no! You used that and it's cummin back to haunt your stoopid a$$ all-ready! Even an eye-so-late-ted DickTater can see that!!!
Now just chill and wee-pete after me...

KIM- (to self) No wonder Chicago is having earf-quakes.
Posted by JihadGene at 9:49 PM

Labels: Who are you anfd from wheres are you calling?

And there we have the democratic campaign in a nutshell. (Yeah, I meant that literally.) Lots of little treasures buried in there. Clever stuff! The only upside to a Barry victory would be that it would be three years of fuel for your humor, Great Reader.

Does this mean Oprah is taking her show on the road to NK???

Teresa, could we ever convince NK to keep Oprah?
Deltabravo